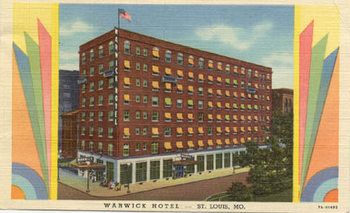 The Associated Church Press traces its origin to a St. Louis, MO, meeting in 1916 at the Warwick Hotel.

Communications groups within the Presbyterian Church (U.S.A.) were honored for their contributions to religious communications in 2015 with 17 “Best of the Christian Press” awards spanning a variety of topics and media. The awards were presented at the 100th anniversary gathering of the Associated Church Press, meting in St. Louis – the city in which it was founded – April 20-22.

Presbyterian News Service (PNS) earned five awards including a Best in Class Honorable Mention for a news service. Awards of Excellence went to PNS for its coverage of the 2015 Big Tent conference and to Paul Seebeck and Mark Fitzer, from production company 180 degrees, for the video Faith Works: Wings and a Prayer. An Honorable Mention was given to Kathy Melvin, director of mission communications, for the article Tucson Young Adult Volunteers Learn Home Repair, Share Cultures, which originally appeared in Mission Crossroads. Finally, PNS editor Gregg Brekke received an Award of Merit for the video news package Big Hearts, Tiny Houses Combine to Advance Mission at Seattle Church.

Presbyterians Today also received five awards including a Best in Class Award of Merit for denominational or special interest magazine. The publication earned Awards of Excellence for Mark Thomson’s art and design of the story How Many People Have to Die? and contributor Scott Dannemiller’s long-format personal account story Faith, Fear, and Toenails. Honorable Mention went to editor Patrick Heery’s article Wounded healers, wounded killers and an additional award for overall design.

The Office of the General Assembly received two awards: an Award of Excellence for in depth coverage of Family Detention by the immigration issues and communications staff of OGA, and an Honorable Mention for social media utilization for Presbyterians For Just Immigration by Teresa Waggener and Laura Polk.

Horizons: The Magazine for Presbyterian Women received two awards. The first was an Award of Excellence in the Theological Bible Reference category for Come to the Waters by Judy Record Fletcher and Larissa Kwong Abazia, edited Betsy Ensign George and design by Laura Lee. The magazine also received an Honorable Mention for overall writing and reporting in a single issue for it May/June 2015 edition on the Power of Language.

Unbound: An Interactive Journal of Christian Social Justice received five awards. Awards of Excellence were given for the editorial Muzzling the Word of God by Benjamin Perry and for the themed coverage of Pedagogy for the Distressed: Thinking About the Mission of Public Education, edited by Ginna Bairby and Chris Iosso. The publication also swept the category of long format first person accounts on a news service or web site: Honorable Mention went to Her Voice Matters: Women's Colleges and Female Empowerment by Carol Ferguson; the Award of Merit was given to Growing Up in the South During Brown v. Board by Dr. Christine Darden; and Burning Frankincense in Iran by Noushin Framke received the Award of Excellence.

“We’re thrilled to have won several awards again this year,” said the Rev. Ginna Bairby, editor of Unbound. “I think being honored several times recently in the categories of personal experience and editorial opinion points to the fact that Presbyterians are living out social justice and social witness policy in their daily lives and have compelling stories to share.”

The complete list of “Best of the Christian Press” award winners is available on the Associated Church Press site.