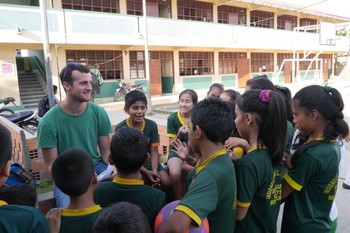 Daniel Pappas is living a life outside his comfort zone—literally and figuratively—in Peru, and he wouldn’t have it any other way. He is a member of the Presbyterian Church (U.S.A.) Young Adult Volunteer (YAV) program. Young Adult Volunteers explore God’s calling in their lives while being part of an intentional Christian community in partner sites around the world.

Pappas said he was somewhat familiar with the program before he applied. His older sister and a good friend served as YAVs and he said they were “raving about the program and its benefits” for two years before he decided to apply. By the time he applied, he was ready for something new.

“I decided to become a YAV to encourage my mental, emotional and spiritual growth,” he said. “I figured nothing would prepare me better for life after college than traveling to a foreign country, living on a budget, and participating in another culture for close to a year. I recognized that the YAV program’s motto—a year of service for a lifetime of change—was exactly what I needed after college.”

Pappas is living in Moyobamba, located in the San Martin region in Northern Peru. He works for a non-governmental organization (NGO) in San Martin called Paz y Esperanza (Peace and Hope).

“I work with indigenous tribes to help them receive government recognition and communal land titles to prevent major companies from tearing up their land,” he said.

Pappas is assigned to the communications branch and works with a journalist, a human rights lawyer, and an environmental engineer on a regular basis. He said they often go into the field and visit tribes such as the Shawi, Awajun, and Kichwa. Pappas also has opportunities to spend time with fellow volunteers and with a host family.

“The YAV program hosts spiritual retreats with your fellow volunteers and site coordinator, so I see Jenny, her husband Jed, and Shaina about four times a year on retreats. Jenny comes by to check on me every now and then, so I see her regularly,” he said. “I spend a lot of time with my Peruvian mom Magda, her two daughters, Joanna and Elisabeth, her three sons, Homero, Alejandro, and Roberto, not to mention the other volunteer we host here in the house, Jennett, who hails from Scotland.”

Pappas said his experience has exceeded his expectations.

“My YAV experience certainly satisfied that desire to get way out of my comfort zone and dive into a culture I’m not familiar with,” he said. “Thankfully I speak the language fluently, so it wasn’t too big of a communication gap.”

Before Pappas left the country, he jokingly said he expected to meet with tribal leaders in ceremonial settings as part of his YAV duties.

“I used to joke that I’d be trekking through the Amazonian forestry meeting with tribal leaders and partaking in ceremonial drinks and food,” he said. “Turns out that wasn’t a joke. I do go out into the field every now and then to take photos. One time I went out and stayed the night. I had to sleep on a table after a full day of hiking the Andean Amazon.”

He said he definitely recommends the YAV program to anyone who is thinking of applying.

“I urge anyone who is interested to go ahead and apply, or at the very least, apply and then learn more about the program,” he said. “And, don’t let money put you down. I raised all of the money for a whole year abroad with the help of Grace Presbytery, Synod of the Sun, and countless people who love and care for me. Once you’ve applied, think long and hard about where you want to be in the world and the kind of changes you want to make in yourself and in the world around you. Ask lots of questions. The YAV office is great at answering them.”

Pappas said he is happy to see the YAV program receive so much support.

“I feel the Presbyterian Church has renewed its commitment to college-age adults with programs like YAV, and I’m incredibly proud of Grace Presbytery’s commitment to the YAV program,” he said. “I can’t say enough how important this is. The legacy of our church continues in ways like this and the Presbyterian Church at large has recognized this and offered its support. It’s absolutely phenomenal and I’m truly blessed by God.”

Keep up with Daniel Pappas by following his blog, http://peruyav.blogspot.com/

Support the Young Adult Volunteer program by donating at this link.

June 1 is the deadline to apply for national placement in the 2016-17 YAV program. Student loan repayment assistance is available during the service year.