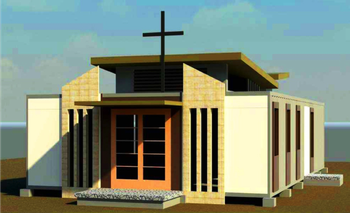 An engineering design depicts what a new church shelter built out of shipping containers will look like in Bohol in the Philippines. —Courtesy Silliman University

In March 2014, an email in the Philippines was sent out that eventually spread across the Pacific. It contained an idea from Silliman University President Dr. Ben Malayang. He’d just seen his country suffer through two deadly natural disasters.

A 7.2 magnitude earthquake shook Bohol in October 2013, destroying more than 14,500 structures, including many churches. A month later the strongest storm ever recorded at landfall, Typhoon Haiyan/Yolanda hit the islands at 180 mph, killing more than 6,000 and causing catastrophic damage, especially in Leyte.

Now Malayang, a noted environmentalist and environment policy expert, wanted Silliman engineers to build “calamity resilient” classrooms and churches out of shipping containers—a resource that is everywhere in the Philippines. There are so many cargo containers in the major transpacific import and export center that companies now park them at landfill sites around the country.

Presbyterian World Mission Asia-Pacific Area Coordinator Mienda Uriarte was in the Philippines in the aftermath of Typhoon Haiyan/Yolanda as the idea was being proposed at Silliman University and Divinity School, a World Mission partner. Uriarte listened to countless stories in villages about how they had no place to go, even as the high winds and rising waters were destroying their homes.

“In Leyte the roofs to a school classrooms were ripped off first,” she says, “All teachers could do was huddle and pray.”

When Uriarte returned home she began talking about the idea and other projects with the wider church. Presbyterian Youth Triennium Director Gina Yeager-Buckley asked Uriarte if she had any mission projects that might be related to the 2016 Triennium theme of “GO.” 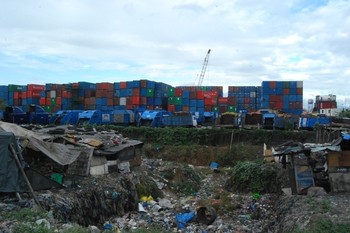 Stacks of shipping containers in the Philippines that companies park near landfill sites. —Frank Dimmock

Hearing that Triennium was looking for a project they could support with an offering, Uriarte thought of the Philippines project and how they hoped to build storm shelters out of cargo containers.

“I saw how it might fit with their theme,” says Uriarte, “how some 5,000 youth could get behind this idea—in helping others in another part of the world have a place to go during a time of disaster.”

The more Yeager-Buckley heard about how the Silliman project might fit with the “GO” theme, the more she was intrigued. Yeager-Buckley knew how much youth care about their environment and world. When she brought the concept to the Triennium team, they agree; this would give youth a chance to make a difference in people’s lives affected by climate change, what scientists point to as a factor in the recent increase of superstorms like Typhoon Haiyan.

At first, there was “a bit of hesitancy” in the Philippines around Dr. Malayang’s idea—a shelter wasn’t exactly what people thought of when they saw shipping containers. But as engineers presented designs of what these churches and classrooms might look like it begin to sink in that this was a very practical, workable idea.

“People could see it met the requirements of creativity and functionality,” says Silliman Vice President for Development Jane Annette Bellarmino. “They began to understand that a ready-made structure could be made available and retrofitted over a shorter period of time than a more traditional structure.”

According to Bellarmino, the design for the church and classroom shelters really wasn’t much of a problem. The engineers’ primary focus was how the building would look. Working with standard measurements of shipping containers, they worked to keep as much of their fundamental materials as possible—the steel used to build them would contribute to them being calamity-resilient.

“We just had to fit it into a design that we thought would make the structure essentially a classroom or church,” says Bellarmino. “We’re proud they were able to infuse practicality and calamity-resiliency into it, and put everything in one piece.”

Construction for the first church shelter in Bohol will begin later this year.

Receipts from the Triennium offering in July will contribute to the next project—a calamity resistant classroom in the National Heroes Institute (NHI)—that will also serve as a shelter for school children. NHI is committed to providing quality Christian education, especially to poor children in Leyte, from grades 1-12.

“Hearing of the support of the youth who will attend Triennium strengthens our faith in God and humankind,” says Bellarmino. “It also affirms how ingenuity that saves lives [and] provides shelter doesn’t have to be sophisticated or expensive all the time.”

“This project celebrates our Filipino spirit,” she adds. “It reminds us how our resilience is like a shipping container—solid in the purpose, yet flexible in terms of the conditions it finds itself in.”

The 2016 Presbyterian Youth Triennium will be held at Purdue University July 19-23.