College leaders join together to discuss challenges of interfaith work 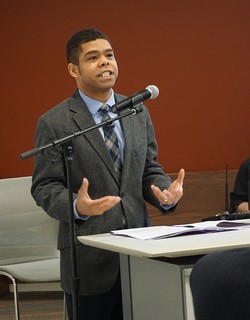 If the eminent, late 20th-century theologian and ecumenist, Robert McAfee Brown, once famously said, “I am ecumenical because I am Presbyterian,” today’s complex, challenging, and increasingly pluralistic world calls for an expansion upon Brown’s classic statement of Presbyterian self-identity.

And perhaps nowhere more critically than on today’s college campuses.

“I want us to say, ‘I am interfaith because I am Presbyterian,’” the Rev. Dr. Clifton Kirkpatrick told a gathering of more than 75 Presbyterian-related college and university chaplains, faculty, presidents and other senior campus leaders in its opening plenary session, “not to deny our faith, but to affirm it more deeply to build a world of religious pluralism.”

Kirkpatrick, professor of World Christianity and Ecumenical Studies at Louisville Presbyterian Theological Seminary and former stated clerk of the General Assembly of the Presbyterian Church (U.S.A.), joins the many educators, college leaders, and experts on interfaith dialogue who are speakers and participants at Fourth Presbyterian Church, April 6–7, in a timely conference, Presbyterian & Pluralist: Equipping Presbyterian Colleges and Universities for Interfaith Leadership.

Co-sponsored by Chicago-based Interfaith Youth Core (IFYC), the Association of Presbyterian Colleges and Universities (APCU), Monmouth College (Illinois), the Presbyterian College Chaplains Association (PCCA), and Fourth Presbyterian Church, the conference aims to enable Presbyterian institutions to engage religious pluralism for purposes of mutual understanding, service to others, and social action by providing students with the education they need to be leaders in a religiously pluralistic world.

“Even though Presbyterian institutions have long held commitments to open and free inquiry, ecumenism, and education in the pursuit of social uplift and righteousness,” said Jeffrey E. Arnold, executive director of APCU,“ there’s still some discomfort across our campuses when it comes to the notion of embracing faith-related diversity. Whether it’s because faith is ‘one of those things you don’t talk about,’ or simply because there hasn’t been any guidance offered to encourage a dialogue, it’s time to come face-to-face with the range of faith perspectives represented across all Presbyterian institutions.” 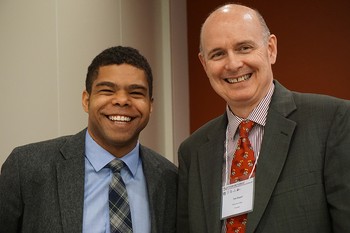 The Rev. Rachel Parsons-Wells, director of Religious Life & Service at Presbyterian College, said she came to the conference primarily to spend time with other Presbyterian chaplains to reflect on the work they are called to do. “I shouldn't be surprised, but many of the PCCA chaplains play a central role in conversations around diversity and lead the charge for interfaith community building,” she said. “The pitfall I often see is that we get caught up in fixing or saving the institutions we serve, forgetting that Jesus has already saved us. God invites us to participate in the work she is already doing. When faced with the demanding voice of being marketable in our consumer-based society, instead of fixing it we should work to commit little acts of rebellion—spaces, moments, communities, and conversations where we can fully live into the body of Christ in colleges that we have been called to be.”

Looking out at the gathering, the Rev. Joe Morrow, campus engagements manager for IFYC and the conference’s primary organizer, said that he was excited that half of the 56 APCU member schools are represented.

In bringing greetings, Morrow set the tone by sharing his personal testimony of transformation in an interfaith context. He called upon conference participants “to center ourselves on the deep significance of our work, how it impacts not only our minds, but also our hearts.”

Morrow said his faith was transformed by having experienced hospitality at an interfaith table, which led him to affirm more deeply his own Presbyterian beliefs. “Let us embrace this opportunity for mutual learning in the hope that our other tables in society will do the same,” he said, “because we, too, have been fed by the other tables that have been set for us.” 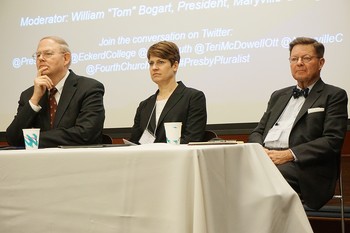 Kirkpatrick said that he was excited to be part of the conversation because it represents three of the things he cherishes most: being a Presbyterian and a part of the Presbyterian Church, being a graduate of Presbyterian-related Davidson College, and seeking peace and reconciliation among the religions of the world.

“There will be peace in the world when there is peace among the world’s religions,” said Kirkpatrick, quoting the theologian Hans Küng, “There is no greater challenge for our world. Our undergraduate colleges and seminaries are challenged to equip Christian leaders for ministry in a world of religious difference.”

In unpacking Presbyterian history, Kirkpatrick confessed a passion for John Calvin while acknowledging that Calvin “could turn the other way” when Michael Servetus was burned at the stake as a heretic in 16th century Geneva.

“We have had our own courtship with intolerance,” Kirkpatrick said.

In her remarks on the panel, Ott—who had earlier shared during her opening greeting that Monmouth College has been in the process of reclaiming its Presbyterian affiliation over the past five years amidst rising religious diversity—echoed Kirkpatrick’s challenge to educators.

“We need our students to be better informed, not so that they can understand our Presbyterian-affiliated colleges better, but understand our pluralistic world better,” said Ott. “We need leaders who know the difference between a Sikh and a Muslim; leaders who know how to make space for the Buddhist and the Jain, so that all will feel welcome.”

Ott added that she senses a real urgency about interfaith work. “I’m stunned by the conflicts I read about between people of different religions,” she said. “To me, [doing interfaith work] feels more like a moral imperative. Our society is in desperate need, and Presbyterian colleges are uniquely suited to meet this need.”

Eastman, president of Eckerd College since 2001, cited the results of the most recent CIRP (Cooperative Institutional Research Program) Freshman survey, noting that there are now five times as many atheists and agnostics on Eckerd’s campus as Presbyterians.

“Students come in the door knowing less and less about Presbyterianism and Christianity,” said Eastman, “and they know even less than that about other world religions. They usually don’t know much about any religion. Fifteen years ago they came in knowing a great deal about the Bible and the Christian religion. Now even those that know something don’t care much for it.”

Eastman said that while every student’s experience is different at the St. Petersburg, Florida-based college, all value the Eckerd community, which he characterized as “open, non-judgmental about attitudes, look, dress, politics—fun-loving, tolerant, supportive of idiosyncrasy, serious about learning, and caring about service to others.

“It’s a college that helps students to learn the great stories, and over time, rewrite what it means to be a Presbyterian and a Christian,” Eastman said. “I think this new narrative will not include churches as we know them.”

The Rev. Robert Lowry, chaplain for the University of the Ozarks, said that, among other things, he was glad for the opportunity to again work with the IFYC.

“This is the second event that I’ve done with IFYC,” Lowry said. “They have been fantastic. The new reality of campus ministry is interfaith. The insight and experience that the IFYC brings has been indispensable for us. I agree with what Cliff [Kirkpatrick] said earlier. It makes me a better Presbyterian to engage in these dialogues.”