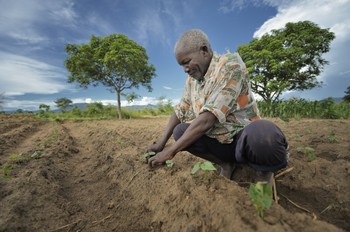 Nerbert Pasidya Mkandawire, 63, encourages his bean plants in Malawi. The country has endured drought and flooding during the crucial planting and harvest seasons. The difficulty of crops surviving these crises has led to food shortage throughout the country. —Paul Jeffrey, ACT Alliance

The weather has not been good for the people of Malawi as they continue to struggle with food security issues. El Nino has caused severe droughts leaving millions with little food as the growing seasons have been thrown off course. When that happens, it causes a domino affect for both farmers and consumers.

“When you miss the growing season there, you have to wait for the next season,” said Luke Asikoye, associate for International Response with Presbyterian Disaster Assistance. “When that happens, the cost of food goes up in the markets.

Asikoye recently returned from a visit to communities in Malawi. PDA has been providing assistance in its food security issues for more than 10 years. El Nino, according to Asikoye, has set many people back. The high food prices have forced many to either do without or sell their assets.

“We were in the process of transitioning out, but because of the food situation, we are going to extend our support for another year more than likely,” said Asikoye. “After another year, we will draw down our basic support. Hopefully by then, the communities will be self-sustaining.”

According to the United Nation’s World Food Program, nearly 40 million people in rural areas and nine million in urban areas will need food assistance in the coming year in Malawi as well as Zambia, Swaziland, Zimbabwe and Mozambique.

But during his recent visit, Asikoye found communities making progress despite the drought.

“The people in the villages I visited have been utilizing the right agricultural methodologies to grow food even during difficult conditions. Some of the villages have even set up savings and loan schemes, much like a community bank,” he said. “As a result of the income they’ve received by selling their crops, they are able to create a loan scheme to support one another.”

The struggle to survive in the drought has been harder for women than men, according to Asikoye. Most of the men have gone into the cities to look for jobs, leaving women in the rural areas to take care of home and family. In many instances, women marry at a young age in hopes of a better life.

“In this area, it is not unusual for women to get married at a young age to escape poverty. But it actually compounds it more,” said Asikoye. “They think that once they get married the spouse will take responsibility for them and take care of them. But if you marry a poor person, they cannot support you.”

El Niño began impacting Malawi in mid-2015 and the conditions are expected to continue through 2016.

PDA’s assisted response includes assessment and registration of affected communities and the provision of such food items as maize, beans and cooking oil, with special attention given to pregnant women, children under five, the chronically ill and those with disabilities.

PDA also supports the efforts of its mission partner in Malawi, the Church of Central Africa Presbyterian which helps 100,000 affected families with food security.