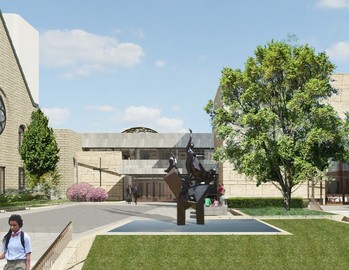 Architect’s rendering of the transition space between the existing sanctuary (left) and new spaces created by the ‘Open Doors Open Futures’ project at Westminster Presbyterian Church in Minneapolis. —Image provided

In an effort to meet the needs of a growing urban population, Westminster Presbyterian Church in Minneapolis has embarked upon a $80 million expansion project to better engage the needs of the city. Several funding streams, including a $35 million commitment from the congregation, have brought the “Open Doors Open Futures” project to life. A community celebration and groundbreaking ceremony will be held this Sunday, April 10, 2016, at 11:15 am.

“The project started in a completely unexpected way,” says the Rev. Dr. Timothy D. Hart-Andersen, Westminster’s senior pastor and head of staff. “Four and a half years ago, a sizeable gift from Presbyterians committed to moving the church into the 21st century helped us buy the property next door.”

Now able to occupy a city block of downtown Minneapolis, the congregation engaged its residential and commercial neighbors in a listening project that included church members. Many of the ideas generated were consistent and complementary to Minneapolis’ “Downtown 2025 Plan” that aims to make the city more livable, green and friendly.

“It hit the sweet spot of what’s happening in our community right now,” says Hart-Anderson of the alignment these sessions found between the city’s plan and the congregation’s mission goals. Twenty percent of the $35 million capital campaign, $7 million, is designated for mission. Hart-Anderson reports a “terrific response,” as almost half of the mission commitment was met through early gifts and nearly $24 million of the total goal has been raised.

“We’re positioning this congregation for the needs of the 21st century in the city,” he said. “We have a 120-year-old sanctuary and we realized our worship spaces have to meet the needs of the new century. The new buildings are designed to let in light and have contemporary architecture. The church needs to change and so in response to growing membership we’ve developed [the expansion] with different kinds of worship spaces.” 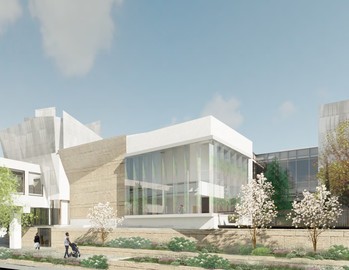 The Rev. David Shinn, Westminster’s associate pastor for congregational care and a Presbyterian Mission Agency Board member, says in addition to the size of the project it is “very forward thinking and visionary” for the downtown area.

“It’s a 100 year vision of how we can continue to be a strong and telling presence for the next century,” he says. “Especially in the age of declining membership—and declining interest in denominationalism—it’s thinking of the future and not just the needs now. It allows space for community partners to be housed in this building—not just for the service and use of Westminster Church, but to open the doors for other agencies who can make use of their reach to the city.”

The 157-year-old congregation says a primary project goal is for the church to be “open to a wider community,” serving the spiritual and physical needs of its neighbors. Classrooms and multi-purpose meeting spaces, in addition to improved accessibility and designated areas for partners, will accompany the building project. A 300-space underground parking facility, along with gardens and green spaces, will complete the plan’s vision for making Westminster a user-friendly destination in the downtown Minneapolis area, near the convention center.

New or expanded services of the church’s mission tied to the “Open Doors Open Futures” project include:

The “Open Doors Open Futures” project is being funded, in part, by long-term financing from the Presbyterian Investment and Loan Program (PILP).

More information on the project is available at the church’s website.