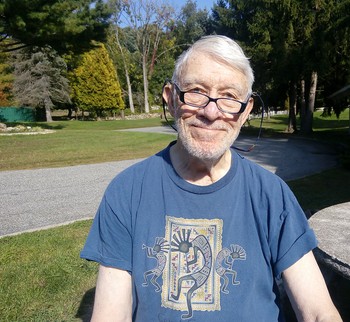 An activist, a student, and a pastor walk into a library.

That library is none other than the Center and Library for the Bible and Social Justice (CLBSJ)—unique of its kind—created in 2011 with the express purpose of bringing a diverse, intergenerational community together around issues of social justice.

“The library struck me from the very beginning as a unique and necessary place to create conversations between scholars and activists, in which scholars could more empirically ground their research and questions in work that activists are doing, and that activists have access to some of the broader and deeper thinking available from philosophers and theologians,” said Mark C. Johnson, executive director of the CLBSJ, an asset of the Community of Living Traditions at the Stony Point Center, one of three national conference centers of the Presbyterian Church (U.S.A.)

Johnson, a pacifist and environmentalist, who served for six years as the executive director of the Fellowship of Reconciliation (USA) prior to assuming his current position, added, “It seemed like a perfect and necessary marriage, so it was an easy move for me in that sense.”

The vision for the CLBSJ began with a “founding conversation” in 2008 among three retired faculty of the Graduate Theological Union in Berkeley, California: Norman Gottwald in Old Testament, John H. “Jack” Elliott and Herman Waetjen, both in New Testament. As it turned out, the three biblical scholars had each been thinking independently about their libraries, which Gottwald called “valuable collections slanted toward social studies and social justice.”

“We didn’t want to give them up or split them up or have them sold off, as happens in many cases, or have them incorporated into another library where most of the books are already there,” said Gottwald in an interview at Stony Point last fall. “In the process of thinking about this and talking with people, we discovered that many people—even those near retirement—hadn’t even thought about what they’ll do with their libraries, which amazed us. After a while we decided it’s almost like thinking about their death.”

Gottwald and Johnson both credit Ched Myers, a Marcan scholar and activist theologian from the Bartimaeus Cooperative Ministries in Oak View, California, as the person who spearheaded the first conversations about the library.

“It was [Myers’s] belief that with a lot of the social justice work that’s done within a Christian context, the people operating don’t know the Bible that well,” said Gottwald. “They’ll know a few famous passages probably, and they’ll have a sense of the basic meanings there, but there are a lot of resources that they could use that they don’t know about. They could use them openly in their work or privately as a resource.”

Once the three scholars—in consultation with Myers—had decided to proceed with the concept, all they needed was a place to house the collection. At just about that time, Rick Ufford-Chase, co-director with his wife Kitty of Stony Point, entered the conversation. 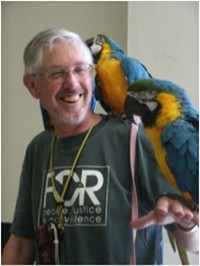 “Rick, who knows Ched very well, said, ‘Wow, we could use that,’” Gottwald recalled, “and so he invited us to Stony Point.”

At that time, Ufford-Chase was beginning to close down the Readers’ Service, which, since 1947, had been collecting and providing books to workers and institutions in countries where books are in short supply and funds are limited. Ufford-Chase had observed that the usefulness of Readers’ Service had been trailing off for a number of reasons, primarily the escalating cost of shipping books. They were also not getting nearly the number of requests that they had once received.

In addition to the space—as well as a number of volumes—made available for the newly-constituted collection by the closing of the Readers’ Service, there were a number of other features that made Stony Point attractive. “The tradition, the history of being a place where many small groups, church leaders, ecumenical and interfaith leaders meet around cutting edge issues made it a nice resource,” Johnson said.

Not long after the three original donors shipped their collections off to Stony Point, other scholars soon learned of the project and followed suit.

“When word got out that the library was there, June Wink gave us 1,200 volumes from [the theologian] Walter Wink’s library,” said Johnson. “Soon after that, Alice Hageman, the social activist and Presbyterian minister with ties to Cuba and Latin America, gave us 800 copies from her collection. As more and more theologians and scholars began to donate from their libraries as they head about it, the collection grew quickly from about 2,500 to 10,000 volumes.”

More recently, the CLBSJ has received a number of volumes on feminism and women in the church from Susan De George, a teaching and preaching scholar, who serves as stated clerk for Hudson River Presbytery. Next year, the CLBSJ will add a link to the library of the Muslim Peace Fellowship to its online catalog, where all of its holdings are listed.

Besides researching its volumes online, Johnson said that the CLBSJ is also just a “good place to come and work.”

“There are a lot of pastor-thinkers out there—people who preach on a regular basis and occasionally engage very actively in social justice issues, such as minimum wage and gender issues—but they don’t always have the resources they need to build the sermon that they want to deliver on a given Sunday,” Johnson said. “Stony Point makes that option readily available and affordable by offering a special weekend package for personal retreats.”

Johnson said that a number of seminary faculty have also utilized the library while on sabbatical. The CLBSJ also works directly with programs at area schools such as Union Theological Seminary in the City of New York, specifically its Center for Earth Ethics, and New York Theological Seminary’s Micah Institute.

To celebrate the fifth anniversary of the CLBSJ, Johnson said that its full board will be gathering for its first time on site to convene an international conference focusing on a range of topics in the field of social justice. The conference—with the working title, “Shaping Solidarity in the Search for Social Justice,” October 20-22—is now open for registration.

Everyone involved in the founding and continued growth and nurture of the original three scholars’ dream is encouraged by the diverse community that is springing up around social justice issues. But even more than that, they take heart that these great collections are being used, thanks to the generosity of Gottwald, Elliott, and Waetjen.

“People ask me, ‘How do you give up all these books?’ Gottwald said. “Well, I’ve read them, and I’ve used them, and I think I know what they’re all about. I look at the table of contents and say, ‘Yeah, I got this. Toss it in!’ Now we have enough people interested; you can see the results.”