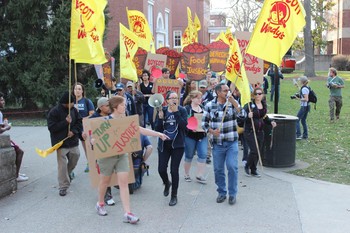 Coalition of Immokalee Workers and supporters demonstrate against Wendy’s Restaurants in March on the campus of the University of Louisville. —Andrew Kang Bartlett

The Coalition of Immokalee Workers (CIW) has been trying for 10 years to convince the Wendy’s company to join the Fair Food Program (FFP), which focuses on the rights of farmworkers. Despite its pleas, the Ohio-based fast food company has said no. Now the CIW is ramping up its campaign by calling for a national boycott of the food chain. This is only the second time in the group’s history that a national boycott has been called. The first time was 15 years ago against Taco Bell.

The Presbyterian Church (U.S.A.) has supported the CIW from the beginning as it worked to secure Fair Food agreements from Yum Brands, McDonald’s, Burger King and Subway. At its recent meeting in Louisville, the Presbyterian Mission Agency Board officially endorsed the call for a national boycott.

“Rather than support Florida growers who uphold human rights under the Fair Food Program, Wendy’s switched its tomato purchases to Mexico, where the denial of human rights in the produce industry was well-documented in last year’s Los Angeles Times expose,” said the Rev. Gradye Parsons, stated clerk of the General Assembly of the Presbyterian Church (U.S.A.) “This is unacceptable, especially from a company that has prided itself on using U.S.-made products. Therefore, the PC(USA) joins the Coalition of Immokalee Workers in calling on Wendy’s to sign a Fair Food agreement.”

The FFP is a partnership between farmworkers, Florida tomato growers and more than a dozen major food retailers. Under the agreement, participating retailers agree to only purchase from suppliers who meet a worker-driven Code of Conduct, including a zero-tolerance policy on slavery and sexual harassment. In addition, retailers pay a penny-per-pound premium which makes its way directly to the workers. In the last five years, buyers have paid more than $20 million into the FFP.

The PC(USA) was the first Christian denomination to sign on for the national boycott, the timing of which anticipates the company’s annual meeting on May 26.

“We encourage Presbyterians to join the Wendy’s Boycott National Day of Prayer on May 23, and for those in the area, to gather outside Wendy’s corporate headquarters in Dublin, Ohio during the annual meeting,” said Andrew Kang Bartlett, associate for national hunger concerns, Presbyterian Hunger Program.

“The Presbyterian Mission Agency stands in solidarity with our sisters and brothers in the Coalition of Immokalee Workers in their longstanding struggle for fair labor practices in the agriculture industry,” said Tony De La Rosa, PMA’s interim executive director. “In so doing, we commit ourselves to advocate ‘…as a prophetic witness to Christ’s transforming justice by speaking and living out God’s truth and compassion.’”

Susan Sampson of Temple Terrace Presbyterian Church in Tampa says the board’s endorsement is for anyone who is an ally of the Campaign for Fair Food.

“The Presbyterian Hunger Program has been supportive of the Fair Food Program for many years and we are grateful that they continue to support the human rights of farmworkers, and have taken this step as well,” she said. “I wholeheartedly support the Fair Food Program and the Wendy’s boycott. I invite my fellow Presbyterians and all people of faith to join with the CIW in the boycott and make fair treatment of farmworkers common practice throughout the industry.”

The CIW’s Gerardo Reyes Chavez says the PC(USA) endorsement of the national boycott is great news for their campaign.

“We are appreciative of the hundreds of thousands of Presbyterians who have steadfastly stood beside farmworkers in making our vision of a just and dignified agricultural industry a reality through the FFP,” he said. “Today, Wendy’s has heard the call of farmworkers and Presbyterians together to take responsibility for human rights in their supply chain, and be part of a program that is ensuring justice for tens of thousands of farmworkers across Florida and the East Coast.”

In March, the CIW announced the launch of the Wendy’s boycott during a multi-state Workers’ Voice Tour where students and people of faith joined them in actions from Florida to New York and through out the southeast. The group organized a demonstration at the University of Louisville and met with PC(USA) leaders before continuing their tour.

For information on the May 23 National Day of Prayer and to download a bulletin insert, click here. To learn about ways individuals and your church can be involved, click here.