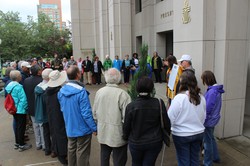 Presbyterians and other faith groups gathered on the steps of the Presbyterian Center in Louisville over the weekend as part of a series of activities to raise awareness about gun violence. —Rick Jones

The National Rifle Association (NRA) wrapped up its annual meeting in Louisville, Kentucky, this weekend just a few miles from the national offices of the Presbyterian Church (U.S.A.). The conference, which included an appearance by Republican presidential candidate Donald Trump, brought an estimated 75,000 people from across the country who attended seminars, auctions and talks by various speakers.

Despite a light drizzle, Presbyterians and other concerned citizens gathered on the steps of the Presbyterian Center to sing, pray and give testimony about the impact of guns on their lives.

The Rev. Alonzo Johnson of the Presbyterian Peacemaking Program led the service, telling the crowd that people and communities need to be made whole again.

“The fact that you are here to take a visual stand says something about who we are as Presbyterians and people of faith,” he said. “We are going to work as peacemakers and find ways to make swords into plowshares.”

Johnson also shared a tragic childhood event that impacted his view on guns.

“A childhood friend and his cousin found a gun in a churchyard near my house and while playing with it, my friend was shot and killed,” he said. “At 12 years of age, it was difficult for my mom to explain why my friend died. I grew up recognizing the power and tragedy of lost life due to handguns.”

“We can do what we need to do to make background checks mandatory,” said Johnson. “We need to address the root causes of gun violence and get guns out of the hands of young people and those who shouldn’t have them in the first place.” 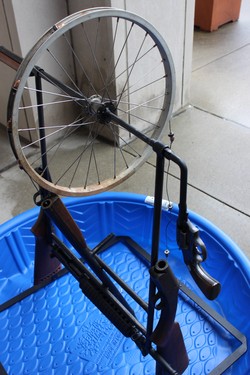 A sculpture made of recycled guns was on display at the Presbyterian Center to raise awareness about gun violence and the drought in Malawi. The sculpture is also a working water pump. —Rick Jones

The Rev. Chris Iosso, coordinator for the Mission Agency’s Advisory Committee for Social Witness Policy, reflected on his years as a pastor in New York state.

“I did four funerals as pastor that were the result of suicide. Three of the four involved handguns,” Iosso said. “I recall a minister’s spouse, who was a sharpshooter and NRA member. She gave up guns when her father used hers to kill himself.”

Mid-Kentucky Presbytery has seen its share of gun violence this year. The Rev. John Odom, presbyter for community life, says the church can’t stand by while “tens of thousands of human beings” are killed by gun violence each year.

“Publicly praying for the victims of gun violence is a powerful way that the presbytery can call out this societal problem,” he said. “The church is committed to ending gun violence and the establishment of more peaceable communities, safe places for all to enjoy abundance of life.”

Odom said guns have taken a high profile in recent years and we are “fast reaching a tipping point.”

“The societal ripples caused by gun violence have extended to such a degree that most families, congregations, neighborhoods and cities have been touched in a direct and personal way,” he said. “We know personally or know someone who is personally connected to gun violence, whether it be the families of victims, healthcare workers, police, firefighters or congregations and pastors who have been left to bury the dead and console the living.”

The event reflected action by the 221st General Assembly (2014) calling for measures to prevent gun violence.

In addition to the songs and comments from pastors and others at the weekend event, attendees also got to see a unique sculpture made of handguns, a semi-automatic rifle and two single-barrel shotguns. Created by a Georgia blacksmith, the sculpture is also a working water pump. It is being used to raise awareness of gun violence and to call attention to the water crisis facing the people of Malawi.

“We are hoping interest in this art piece will generate funds to help build rope pumps in the drought-stricken country,” said Frank Dimmock, global poverty network catalyst with World Mission. “This sculpture grew out of a showing of the PDA documentary ‘Trigger’ at a church in Decatur, Georgia. The congregation became interested in how they could bring together two major issues, addressing drought and the recycling of guns.”

The sculpture will be on display at the 222nd General Assembly next month in Portland.