Technology expands the congregation for opening worship of GA222

The church, world are invited to stream in 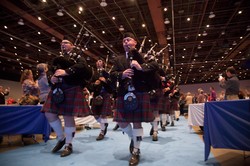 The Alma College Pipe Band processed into the Assembly Hall at Opening Worship. —by Michael Whitman

Several thousand people are expected to gather in Portland, Oregon, on Saturday, June 18, for the opening worship service of the 222nd General Assembly of the Presbyterian Church (U.S.A.).

But the congregation could potentially be much larger—with groups of Presbyterians across the country using live stream technology to participate in opening worship from their own church sanctuaries and meeting spaces. The Committee on the Office of the General Assembly (COGA) is encouraging congregations and mid councils to gather groups in their locations to worship with the assembly via live stream. The live stream player will be in place of the promotional video on the Assembly home page at pcusa.org/ga222 on June 18th.

“This was an idea that came from the committee at one of our meetings,” says COGA Chair Margaret P. Elliott. “The concept is a unified PC(USA) participating in worship from all corners of the country and the world.”

The goal is to help more Presbyterians “feel a part of the assembly, rather than feeling like the assembly is apart from them,” says Tom Hay, director for assembly operations in the Office of the General Assembly.

In recent years, growing numbers of individuals have watched assembly worship and business sessions via live stream on their computers, Hay says. As many as 30,000 computers have been logged on at various times during previous assemblies. There were even people in Israel logged on during the debate on Middle East issues at the 221st General Assembly (2014).

This year, when it comes time for opening worship, COGA members hope to transform passive watching into an experience of active engagement.

“Helping people get together for worship makes it less like a drama and more like something they are participating in,” Hay explains.

The assembly’s opening worship service begins at 11 a.m. Pacific Daylight Time and is scheduled to last about ninety minutes. It will include communion, the commissioning of assembly commissioners and advisory delegates, a sermon by outgoing Moderator Heath Rada, and music by a mass choir, a bell choir, and a contemporary band.

The liturgy for the service—including the words and music of hymns—is available online for download by groups planning to worship in other locations. Congregations joining the service by live stream may want to plan how to participate in the Lord’s Supper as well.

This may be a different perspective on General Assembly for those who tend to think the biennial meeting is only about debating controversial issues.

“Over and over I am hearing our members say they are tired of disagreeing, they are ready to become the Body of Christ in ways that are harmonious, and to be unified through Christ,” says Heath Rada, Moderator of the 221st General Assembly (2014). “The opening worship service provides the opportunity for us to witness to others that in spite of our differences, we do not disagree when it comes to gathering around the communion table and worshiping our God.”

It is important “to connect the business of the assembly with the worship and prayers experienced by those at the assembly,” Hay says.

He hopes that those who are distanced—both literally and figuratively—from the General Assembly will come to view those gathered in Portland “as Presbyterians who worship and believe just like they do.”