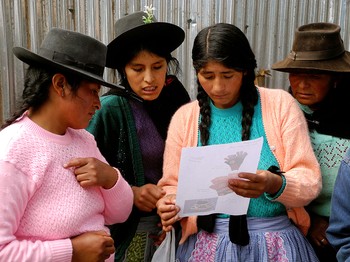 Artisans from the group Tupac Yupanki, which is supported by Partners for Just Trade, review an order. —Jessica Penner

Artisans in countries like Peru and Cambodia that have struggled with extreme poverty most of their lives, are celebrating a milestone. Partners for Just Trade (PJT), an independent non-profit sustainable business, is commemorating its tenth anniversary.

PJT began as an initiative of the Giddings-Lovejoy Presbytery and the Presbyterian Hunger Program when visiting Presbyterians began bringing handcrafts back to the United States for sale in churches. With strong support from PHP’s Joining Hands Network in Peru, a dedicated group of volunteers and Giddings-Lovejoy, the non-profit has taken off providing invaluable support for artisans seeking better wages and a better life.

“A small partnership created by a handful of Presbyterians visiting Peru blossomed into the growing non-profit organization PJT is today,” said Cheryl Musch, PJT executive director. “National sales of our fair trade products are not just from Peru, but from in-need artisans in Cambodia, Haiti and Egypt as well.”

Now, more than 15 artisan groups with over 200 artisans, work with PJT through the Peruvian trade partner “Bridge of Hope.” PJT is also recognized as a participant in the national Fair Trade movement, providing superior products while educating consumers on the benefits of Fair Trade.

Presbyterian Hunger Program coordinator Ruth Farrell, who served as a mission co-worker in Peru, describes the “Bridge of Hope” fair trade corridor as one of the biggest blessings of her life.

“I remember visiting a knitting cooperative and the women were planning their campaign to get city water into their hillside. Prior to the cooperative, the group wanted to remain invisible, having moved to the hillside to escape years of political violence in Peru’s mountains,” she said. “Now through their cooperative, the group proudly pointed out that they were paying municipal taxes and felt they deserved the water. As taxpaying citizens, they now had no need to be invisible and carried themselves differently.”

Farrell says the women working in the cooperative not only learned to organize their business, but were organizing the community as well.

“My initial reaction was to see all the reasons a fair traded corridor couldn’t work, but I learned to step out in faith and trust sisters and brothers in the communities of Peru and in Giddings-Lovejoy Presbytery who knew a better life for all was possible,” said Farrell. “Our Giddings-Lovejoy volunteers realized that to really make livelihoods sustainable for the artisans, they needed the stability of a non-profit organization with paid staff.”

Started by a $7,000 One Great Hour of Sharing grant, PJT helps secure fair wages for the artisans, enabling them to provide food, shelter and medicine for their families, educate their children and reclaim personal dignity, according to Musch. 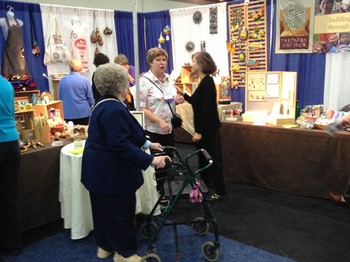 “Ten years later, Partners for Just Trade has helped artisans sell more than $2 million. Most are women who can work in their communities while caring for children,” said Farrell. “PJT is still located in the presbytery building and utilizes a lot of volunteers.”

Among those early volunteers was Carolyn Newcomb from the St. Charles Presbyterian Church in Missouri. She made her first visit to Peru in 2002. “As a result, my life was dramatically changed as I met people I will never forget and found myself on a whirl-wind learning curve in so many ways,” she said.

Over the next several years, Newcomb, Farrell and the Joining Hands Network worked to open a fair trade corridor between the U.S. and Peru.

“In just three years, the people in each of the artisan groups we had worked with, had gone from making less than $1 a day to $40 a week or more,” said Newcomb. “Their income to support their family and nurture their dreams had increased by 300 percent and my basement was no longer used for storage because we were able to rent a storage unit.”

Another early volunteer was Robert Thornberry of the First Presbyterian Church of Alton, Illinois.

“I’m a ten-year veteran who got hooked visiting artisan workshops during a mission trip to Peru in 2006,” he said. “With some terrific people, I’ve promoted and sold artisan goods ever since. I relish the stories about the artisans that come filtering back. Lives have been enriched, transformed and renewed.”

Working through PJT, Musch says artisans determine the price of their handcrafts which includes a living wage, materials costs as well as a five to ten percent profit so the artisans can invest in materials and equipment.

“Without the support of the Presbyterian Church (U.S.A.), particularly the Presbyterian Hunger Program, there would be no PJT,” said Musch. “PHP has provided ongoing support for our organization and our Joining Hands Network partner in Peru. PJT grew out of PC(USA) initiatives and is really a daughter of the church.”