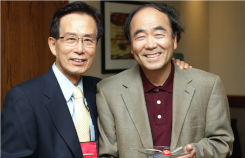 A Korean Presbyterian leader whose ministry spans nearly half a century was honored at a retirement party Friday evening by Presbyterians gathering in Portland for the 222nd General Assembly (2016).

“Sun Bai once said that a leader is one who does not wait for things to happen but helps make things happen,” says Rhashell Hunter, director of the PC(USA)’s Racial Ethnic and Women’s Ministries, which hosted Kim’s retirement celebration. “Sun Bai Kim is definitely a leader who makes things happen.”

Born in Korea, Kim was ordained in 1969 by the Presbytery of Seoul. A third-generation Presbyterian, he proudly tells the story of how his grandfather was baptized by a Presbyterian missionary at the age of 13. The boy and his mother became the first Presbyterian Christians in Jeonjoo, a city in southwestern Korea, in 1897.

Kim says his long career has been motivated by gratefulness for the U.S. Presbyterians who laid the foundation for a vibrant church in Korea. “The reason I’ve served the PC(USA) and worked so hard for 40 years is that I strongly felt that I need to pay back what I owe to this great church,” he says.

“Sun Bai was a tireless and faithful leader for our Korean constituencies,” says the Rev. Gradye Parsons, Stated Clerk of the General Assembly.

“He was always reminding the church of the historic and important partnership of the PC(USA) and the Presbyterian churches in Korea.”

After coming to the United States for advanced study, Kim began his ministry as a new church development pastor of the Korean Presbyterian Community Church in Columbia, South Carolina, in 1977. Four years later, he became pastor of the Korean Community Presbyterian Church of Atlanta. The congregation grew in worship attendance from about 60 to 350 under Kim’s leadership and now draws some 3,000 people to its worship services.

“Sun Bai is a deeply committed individual,” Hunter says. “Among his best qualities are his faithfulness and spirituality. He is respected throughout the denomination and beyond.”

Kim’s wife, Grace Choon Kim, associate for Korean curriculum development for Congregational Ministries Publishing, is also retiring after some 40 years of service to the PC(USA). The two plan to remain in Louisville and spend more time with their grandchildren.