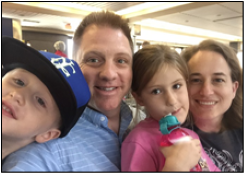 General Assembly is a family affair for Greg and Heidi Bolt, pastors from Nebraska who came to Portland with their children, 6-year-old Sophia and 4-year-old Thaddeus.

Heidi, a commissioner from Homestead Presbytery, said the new Dependent Care Reimbursement Policy implemented for the first time this year by the Committee on the Office of the General Assembly made it possible for her to be accompanied by her husband and children.

“We are a General Assembly kind of family,” said Greg, who began attending assemblies with his parents when he was 10 years old. He has continued attending as an adult, he says, because it has “helped my ministry.”

“We plan to be here, and we like to have some family time in the midst of the chaos of the meeting.”

Under the new dependent-care policy, commissioners and advisory delegates may be reimbursed for the costs of a variety of caregiving arrangements, as long as the expenses don’t exceed $800 for the first dependent, or $400 per additional dependent.

Commissioners can apply for financial assistance with such things as hiring part-time sitters, at home or at the assembly; transporting a family member or other caregiver to their home or to the assembly; placing dependents in a child- or adult-care center; or sending dependents to a camp or conference.

Heidi applied for financial assistance and used it to pay the plane fare for Sophia and Thaddeus. “I like that the policy is flexible, because everyone has a different situation,” she said.

The Bolt children spent a few days in Portland with their parents, then went to stay with grandparents in Corvallis, Oregon. A highlight of their time at the assembly was attending Saturday’s opening worship with several thousand Presbyterians, Heidi said.

“I had someone come up to me after worship who saw my kids and said, ‘I’d love for my kids to be able to experience General Assembly.”

Lindsay James, a teaching elder commissioner from the Presbytery of John Knox, also has benefited from the dependent-care policy. She and her husband, Christopher, a professor at the University of Dubuque Theological Seminary, brought their children, 6-year-old Ginny and 3-year-old Luke, to Portland with them. The children are staying with Lindsay’s parents, who live about a half-hour’s drive from the Oregon Convention Center.

“I’d never participated in a General Assembly before,” Lindsay said. “Being away from my family for a week has been a major barrier.”

Her son has a sensory disorder, so she worried that issues might arise because of his unique needs. But she was able to borrow a car from her parents and use her dependent-care assistance to pay for parking at her hotel and convention center.

“If there are any issues, I can get in the car and go,” she said. “Just to have that flexibility puts me at ease and enables me to be more present at the assembly.”

Also new at this assembly is a family room (C-126) provided by the Office of the General Assembly and the Committee on Local Arrangements. The room is equipped with a rocking chair, refrigerator, microwave, and pages for children to color.  There  is a private space for nursing mothers, and a TV screen to follow assembly business.

“There was free apple juice the day we visited,” Heidi Bolt said. The dependent-care policy is particularly significant for the Bolts, because Greg was involved in making it happen. As a commissioner to the 221st General Assembly (2014) he co-wrote, with commissioner Joseph Murrow, a commissioner’s resolution calling for child care to be provided at all General Assemblies.

The assembly referred the resolution to COGA, which appointed a sub-committee to work on a plan that would best meet the needs of commissioners and advisory delegates. The resulting policy broadens the focus from “child care” to “dependent care.” Caregivers may use the financial assistance to arrange for care at home or to bring their dependents to the assembly.

“The dependent-care policy is different from the idea we had,” Greg said, “but it’s better.”

Dependent care is back on the docket of this year’s assembly. The Mid Councils Committee voted not to approve an overture calling for all church councils to develop dependent-care policies. Instead, the committee is recommending that commissioners answer the overture by directing the Presbyterian Mission Agency “to develop resources for councils at all levels to provide for dependent-care policies.”