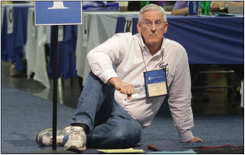 After a six-year discernment process throughout the denomination, the 222nd General Assembly (2016) of the Presbyterian Church (U.S.A.) approved on Friday a lengthy report underscoring the centrality of peacemaking to Christian faith and promising to “practice boldly the things that make for peace.”

“Risking Peace in a Violent World: Affirmations for Presbytery Consideration” was ordered by the 219th General Assembly (2010) to “seek clarity as to God’s call to the church to embrace nonviolence as its fundamental response to the challenges of violence, terror, and war.” The report calls for Presbyterians at all levels of the church to employ its insights to respond to and prevent violence on the local, national and international levels through prayer, direct action and advocacy.

The study was approved by the 220th General Assembly (2012), then approved for study. The 221st assembly (2014) sent it to the presbyteries for advisory votes. Of the approximately 40 presbyteries who responded, more than 30 approved the report’s five “affirmations,” although with differing levels of support.

“I have great appreciation for all those who had a part in bringing this report to the floor of the General Assembly,” said Rick Ufford-Chase, moderator of the 219th General Assembly, who played an integral role in formulating the call for the study.

“This has been done the right way, have been discerned and voted upon at the last three General Assemblies,” Ufford-Chase said. “What we are doing by approving this report and its affirmations is lifting up our denomination’s position on peacemaking during a most difficult time in our history.”

Following the 332-169 vote, commissioners stood and recited the five affirmations of the report’s conclusions:

It was noted that the financial cost of having the report produced and distributed is estimated at $165,850 over the next two years. The cost of the project will be taken from the Presbyterian Mission Agency budget. Commissioners also approved by voice vote an overture from the Presbytery of Cayuga-Syracuse calling for the denomination to urge the United States acknowledge its role in the killing of nearly 300 Korean civilians near the village of No Gun Ri in July 1950. The overture asks the Stated Clerk of PC(U.S.A.) to communicate to the president and members of the United States Senate and House of Representatives the denomination’s desire for the nation to provide appropriate compensation to the surviving victims and to the families of those killed or wounded in the incident. In addition it calls for a meeting between surviving U.S. troops involved in the incident and surviving Koreans or relatives of the deceased, and the creation of a memorial. Other  assembly actions on the recommendations from the Committee on Peacemaking and International Issues are available on PC-Biz at https://www.pc-biz.org/#/committee/575/business.