Home News Presbyterians and other faith leaders believe peace and reconciliation are possible in Colombia, despite three generations of war and trauma

Presbyterians and other faith leaders believe peace and reconciliation are possible in Colombia, despite three generations of war and trauma 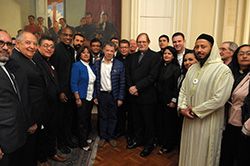 From his home in Colombia’s northwest Urabá region, Jesus Vargas Cuesta has lived and breathed the fifty-plus-year war that birthed such horrors as murder, kidnapping, rape, and mass displacement.

There were “two periods in Urabá, two periods of violence,” he said. There was 1984–1994 when “there were a lot of massacres of banana workers” by armed guerillas, and 1996 when “the paramilitary groups came, and that led to much stronger violence” and the killing of both guerillas and those allegedly supporting them, Vargas said.

“I’ve been an eye-witness to many deaths,” he said. “We have been victims of the atrocities of war.”

By all accounts Vargas should be hesitant to reconcile with those who’ve done the most harm and caused such massive trauma. Yet the situation is quite the contrary for this teacher and member of the Presbyterian Church of Colombia (Iglesia Presbiteriana de Colombia).

“At my age, it’s been sixty years of living with violence,” Vargas said. “I believe that now it is fair to live a time of peace and tranquility, especially for all of the new generations.”

Jesus Vargas Cuesta on the history of violence in Colombia from Office of the General Assembly on Vimeo.

He, like many victims of the longest-running war in the Americas, is advocating for peace and reconciliation in his native land, despite the pain and suffering that has changed the psycho-social landscape of the South American nation.

In fact, he is among those rallying for Colombians to vote “yes” in an October 2 referendum to accept or reject the peace accord recently reached by the Colombian government and the Revolutionary Armed Forces of Colombia (Fuerzas Armadas Revolucionarias de Colombia—FARC), Colombia’s largest guerilla group.

The deal was announced August 24 after years of negotiations. The Presbyterian Church of Colombia was instrumental in helping to negotiate the peace agreement, which was reached in Havana, Cuba. The church also is active in the interfaith campaign, Si Creo En La Paz (Yes I Believe In Peace), and has formed a synod-wide commission for peace. The “yes” camp needs at least 13 percent of registered voters, or 4.4 million ballots, for the referendum to pass.

On Friday, September 16, Colombian President Juan Manuel Santos applauded the efforts of Presbyterians and other faith communities during a large interfaith gathering he hosted. And, he called on the faith community to continue its work for peace and reconciliation, work he said has inspired him.

“I just want to thank you from the bottom of my heart,” he told the crowd of about 150 faith leaders and others. The presence of the faith community is “an injection of energy in and for me to continue this process.”

While many in Colombia favor the peace accord, a large percentage of the population oppose it. A key leader in the opposition movement is former Colombian President Álvaro Uribe, who served from 2002 to 2010.

Santos, who has admitted the government’s role in killing members of a leftist political party that included FARC members three decades ago, acknowledged peace won’t be easy and that there are many obstacles. Still, “we need to find those common places to continue building peace,” he said.

Three generations have endured war and it has taken away the country’s capacity to feel, Santos said. “We need to recover that as a society.” 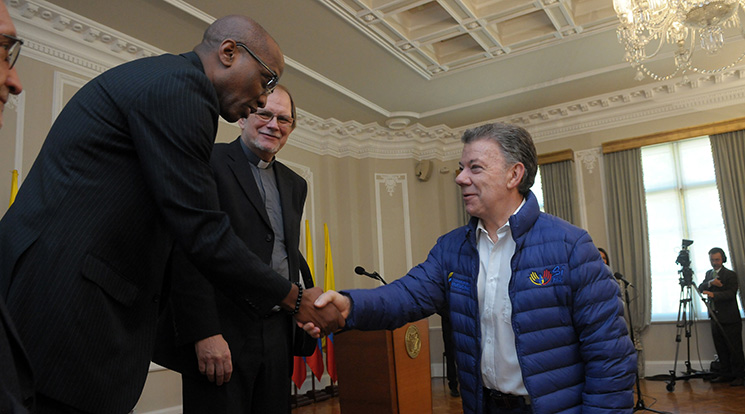 Image by - Office of the President, Colombia

The Reverend Dr. J. Herbert Nelson, II, Stated Clerk of the Presbyterian Church (U.S.A.), told Santos and the others gathered for the event that love is the key to maintaining peace and rebuilding what Colombia has lost.

All of our holy books remind us that “love binds everything together,” he said. “We believe you are taking a step in the right direction.”

He also told of a meeting he had the previous day that included four Colombian high school students nearing graduation.

Those students “spoke from the depths of their hearts,” and one even had tears in her eyes, Nelson said. “They want peace for their future.”

“This is a moment for you to build a legacy for the future of those young people,” he told Santos. “Love conquers all. … Love is possible.” 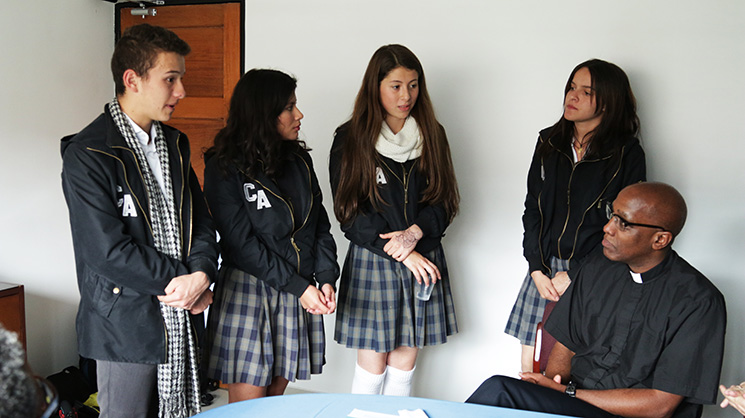 The Reverend Luis Fernando Sanmiguel, pastor of Community of Hope Presbyterian Church in Colombia and a leader in peace negotiations, said the church has had and continues to have a pivotal role in brokering peace.

The interfaith campaign, Si Creo En La Paz (Yes I Believe In Peace), is being widely communicated throughout the country, and the Presbyterian Church of Colombia’s synod-wide commission for peace is developing concrete resources and systems to help foster peace in the communities that need it the most.

Rev. Luis Fernando Sanmiguel on the proposed Peace Agreement from Office of the General Assembly on Vimeo.

All of that is especially critical for those like thirty-year-old Yasmin Mosquera, who said, “since I was very young I’ve felt the effects of violence.”

From the time she was born her community in Colombia’s Urabá region was immersed in violence, and “nights were full or terror.” Mosquera recalls hiding under her bed in fear of stray bullets, and said her grandfather was threatened by paramilitary when she was ten.

She also said her daughter, now in her teens, has had to grow up without a father. He was killed by an armed group.

Still, Mosquera said, “trusting in God has helped us move forward as a family. … Trust in God and in the love of brotherhood has allowed us to move forward.”

“We are brothers and sisters, children of God,” she said. “We must look for reconciliation.”

Yasmín Mosquera from Office of the General Assembly on Vimeo.

To learn more about Colombia and the PC(USA)’s 160-year relationship with its partner church, go to https://www.presbyterianmission.org/ministries/global/colombia/. The Colombia Mission Network also is a vehicle for supporting efforts in the country.