Resource will aid visitors to Big Tent this year, GA223 next year

A map can be an essential tool for anyone embarking on a road trip.

Now a different kind of map—an interactive map of Presbyterian historic sites—is available for those headed to St. Louis to attend Big Tent (July 6–8) or the 223rd General Assembly (June 16–23, 2018).

The new online map, developed by staff in the Presbyterian Church (U.S.A.)’s Office of the General Assembly, gives locations and information about thirteen historic churches and other sites in the St. Louis area. 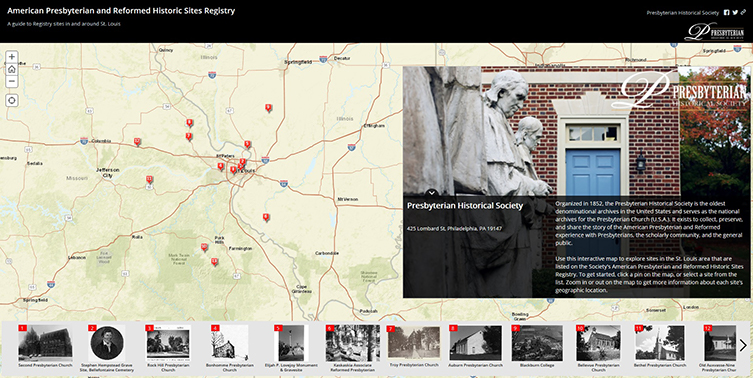 On the map, the sites are flagged by numbered red signpost icons. Click on a signpost or one of the photos below the map to read a short blurb about the history of the site. Zoom in on the map for more exact street locations.

The sites include Blackburn College, founded in 1837 by pioneering Presbyterian pastor Gideon Blackburn, and the monument and gravesite of Elijah P. Lovejoy, a Presbyterian minister whose crusade against slavery cost him his life. Also featured are historic churches, including Bonhomme Presbyterian Church, the second oldest congregation west of the Mississippi River.

“I like the idea of the map as an entry point for visitors,” says Jennifer Barr, reference archivist for the Presbyterian Historical Society (PHS), one of the site map developers. She compiled the images and historical information about the featured sites. She also plotted the latitude and longitude coordinates of each site for placement on the map.

“It’s a very useful tool,” she says, noting that the map can be accessed on computers, tablets, and mobile phones.

Vicente Guna Serrano, manager of technologies in the Office of the General Assembly, built the online platform for the site map with input from David Staniunas, records archivist for PHS.

Guna describes the resulting resource as a “story map,” which he says is “an interactive way to tell a story” using mapping technology. The story map platform can incorporate text, maps, photos, and multimedia and allows users to reference other sources through links.

The thirteen sites on the St. Louis map are among the 445 sites listed in the American Presbyterian and Reformed Historic Sites Registry on the PHS website.

Barr says PHS began compiling the registry in 1973, inviting Presbyterians across the country to send applications for churches or other historic sites. The applications were assessed by a committee of historians. Those judged of greatest historic significance to the larger church received a historical plaque and were listed in the registry.

PHS staff wrote a history of each site for publication in the Society’s Journal of Presbyterian History. The final histories will be published in the winter 2017 issue of the Journal, Barr says.

The registry project continued until 2003, but is no longer accepting applications. However, says Barr, PHS is looking for other ways to highlight local church history. Story map technology may be the key.

The St. Louis site map is “a trial run,” Barr says. “We’re hoping to be able to use this tool for the entire collection of 445 sites.” PHS staff are discussing how “to make this expandable”—that is, how to develop a system for gathering and managing information about sites that are not on the registry.

In every part of the country, local Presbyterians are aware of people, places, and events of historic significance to the church, Barr says. “We want to help congregations tell their stories.”