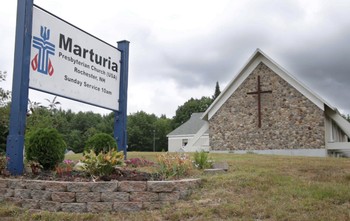 The churchyard at Marturia Indonesian Presbyterian Church was abuzz with families pruning trees and clearing out brush. Members were preparing for the harsh New England winter.

In their hearts, they are preparing for much more.

Marturia members and others in the Indonesian and Brazilian communities in this part of New England have fallen under the focus of Immigration and Customs Enforcement (ICE). Their trouble started in January when President Donald Trump issued an executive order on interior immigration enforcement, which prioritizes enforcement against a wide portion of the migrant population in the U.S. and minimizes the use of a long-established practice of prosecutorial discretion.

“Under previous administrations, immigration would focus enforcement efforts against those committing serious crimes,” said Amanda Craft, manager of advocacy for the Office of Immigration Issues in the Office of the General Assembly (OGA). “Conversely,” she added, “for those with no record and significant family and community ties, they would offer mercy in the form of prosecutorial discretion. The executive order changed all of this.”

The loss of DACA and the end of prosecutorial discretion threatens many in this 210-member congregation. Having arrived in the late 1990s and early 2000s, these Presbyterians fled Indonesia as religious minorities but failed to make their claims for asylum within the one year deadline imposed by the government.

Many, upon realizing their mistake, applied late and, while not granted asylum, have been allowed to stay in the U.S. year after year under orders of supervision or DACA, both forms of prosecutorial discretion. Others, seeing their neighbors lose their asylum claims, never applied and, though technically undocumented, have been peacefully living in and contributing to communities across the U.S.

As church members go to their regularly scheduled appointments with ICE this year, they are consistently informed their permission to stay will no longer be renewed and ICE officers are directing them to return with plane tickets to leave the U.S. They are preparing to be deported.

“Personally, I feel more American than I feel Indonesian because I’ve been here since I was little,” said Anita, a Marturia member and recipient of Deferred Action for Childhood Arrivals (DACA), expressing fear for the end of that program and fear for her parents continued presence in the U.S. “I went to school here and my everyday life is here.”

Staff from the Office of Immigration Issues, volunteers from Presbyterian Disaster Assistance, and leadership from the Presbytery of Northern New England gathered at Marturia Church over the Labor Day weekend to hear these concerns, to organize advocacy efforts, and to facilitate conversations about how to prepare for this human-caused disaster.

Members shared a collective fear of separation from their families. They spoke of the financial stress they were under as ICE has also stopped renewing their work permits this year.

The heart of their focus was on their children, as one parent after another described their child exhibiting sleeplessness and headaches. Members fought back tears as one boy, David, said to the group, “I am eleven years old, only half-way until I can cover my parents and everyone,” referring to the family immigration process that he cannot utilize to regularize his parents’ statuses until he is twenty-one years of age.

Members also expressed concern about the future of their ministries. “[All] of our members are important to the survival of the church,” said Ed, a member and volunteer bookkeeper at Marturia Church. “We still owe $300,000 on the mortgage. If we lose twenty to thirty members of this church, we will not be able to survive.”

Similar concerns are being expressed in the neighboring Presbytery of Boston, where members of a Brazilian “1001 New Worshipping Communities” group on the verge of chartering as a PC(USA) congregation, have stopped attending services.

“People are being pulled over or questioned in grocery store parking lots,” said the Reverend Paulo de Lima, the fledgling congregation’s pastor. “They are afraid to come out, even to come to church.” The presbytery’s resource presbyter, the Reverend Cindy Kohlmann, does not know if there are enough remaining members to support the minimum requirements for de Lima’s position. 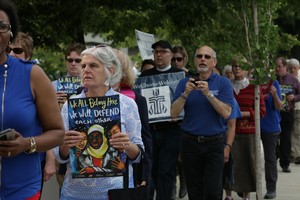 Members of the Presbytery of Northern New England and volunteers for the Presbyterian Disaster Assistance participate in a prayer vigil outside of the Norris Cotton Federal Building where immigrants report to ICE. —Randy Hobson

This situation is not unique to Northern New England and Boston, nor to Indonesians and Brazilians. Congregations across the U.S. are scrambling to fill out paperwork to grant custody of their children, control of their personal property, and access to medical and legal records to trusted friends and fellow members as they face the possibility of detention and deportation.

“No family should have to make the decisions these families are being forced to make,” said Craft.

As families prepare for the worst, they are also pressing forward in hope. Local and national advocacy efforts are forming. On September 5, 140 New Hampshire faith leaders and organizers lifted the plight of these immigrants at a prayer vigil outside of the local ICE office. These vigils, which are happening more regularly now as the ICE check-ins have become more frequent, are often attended by the mayor and state senators as well.

In August of this year, the Stated Clerk, the Reverend Dr. J. Herbert Nelson, II, wrote to national and local ICE officials on behalf of Marturia members: “They are each a part of our family of faith. I ask that you do not needlessly, wantonly, tear our family apart.” Nelson will accompany members and participate in a vigil outside the ICE office later this month.

The Office of Immigration Issues and the Office of Public Witness have created an action alert to allow all PC(USA) members to engage in the effort. Craft cautions that this is not all that needs to be done, however.

“Too many long-time members of our communities have gone too long without status or under temporary statuses that are not being renewed this year,” she said. “The only just and fair solution is a comprehensive immigration reform that honors family unity and takes into consideration the many years our friends and neighbors have been in the U.S. Too many have been made too vulnerable for too long.”