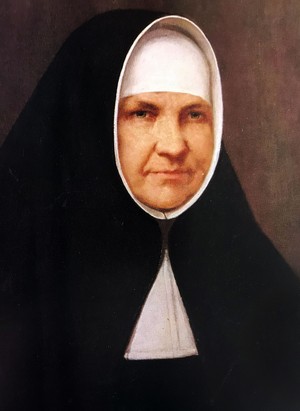 A lot of people are fascinated with family history. But it’s not every day that you find out that one of your ancestors is about to be canonized by the Catholic Church in Rome. That’s what happened to Norma Thieman recently.

Thieman is a program assistant/registrar with the Office of the General Assembly’s Church Wide Ministries. Newly Sainted Maria Katherina Kasper is a distant relative, her great grandmother’s first cousin.

“The idea came to my head that I should google her. I had never looked her up on the Internet and never thought about it,” she said. “I wasn’t sure I would find anything, so I looked her up and the first thing I saw was news about the upcoming canonization.”

Mother Mary Katherine, as Thieman and her cousins refer to her, grew up in the German Roman Catholic faith. Born to a peasant family in 1820, Kasper aspired to be a nun, but her poor economic status and the deaths of her brother and father, delayed that dream, but not her drive, said Thieman.

“She came from a very poor family, and had always wanted to be a nun, but there was no order for her to join, so she created her own order from nothing, with a few women who wanted to do this,” said Thieman.

Kasper was one of the founders of the Poor Handmaids of Jesus Christ (PHJC), an international congregation of apostolic women within the Catholic church. Its focus has been ministry to the poor, sick, and children. From its roots in Germany, it has grown to provide ministry support in the United States, Mexico, England, the Netherlands, India, Brazil, Kenya, and Nigeria.

Kasper served five consecutive terms as the order’s Superior General and died at the Dernbach motherhouse in western Germany in 1898. Her canonization process was launched in the 1940s and she was beatified by Pope Paul VI in 1978.

“We knew she had been beatified and I felt it was an honor to be blood related,” said Thieman. “It was awesome. I don’t know anyone else who has had this kind of family history.”

The canonization process begins when it is determined that a miracle has occurred in connection with the ministry of an individual. In Kasper’s case, there are two miracles associated with her work with the PHJC. 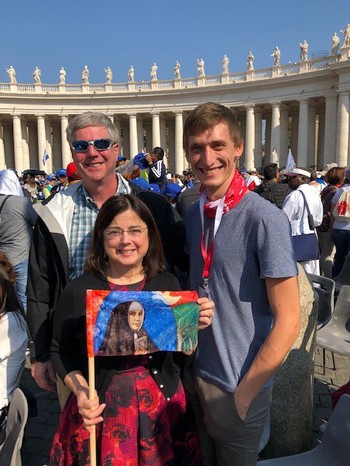 Norma Thieman holds a picture of her ancestor, Maria Katharina Kasper, in St. Peter’s Square at the Vatican, along with her husband, Bob (left) and Kevin Herrmann (right) with the Diocese of Germany.

The first miracle, according to the Catholic church, was a nun’s cure from tuberculosis in India in the 1940s. The second miracle occurred in 2011, after a man in India had been seriously injured in a motorcycle accident.

“He suffered multiple injuries including a fractured spine and other internal injuries. He was in a coma and doctors said if he regained consciousness, he would need several operations to survive. It was dire,” said Thieman. “Everyone in the order was praying and within three days, the man started getting better. The Vatican interviewed his doctors, reviewed his file, and looked at X-rays, concluding there was no medical reason he should have been cured.”

Once Thieman learned that the canonization, to be held at the Vatican, was only a few weeks away, she and her husband scrambled to get tickets. Once they were secured, it was off to Rome in mid-October.

“Just because you have a ticket, doesn’t mean you get in because they gave away some 50,000 plus tickets,” she said. “We arrived a day earlier and scoped out St. Peter Square. The mass the next day was at 10 or 10:30 in the morning and we got there four hours early and found there was already a big line.”

There was a large crowd in attendance as seven saints were recognized, including Pope Paul VI. Thieman says she and her husband sat next to a group from the Diocese in Germany that Kasper belonged to and was very moved by the two-hour mass.

“I felt very humbled to be there,” she said. “The music was beautiful. The Pope led the service in Latin. I felt divinely inspired.”

Thieman says she’s learned a lot from the experience and reading about Kasper and her ministry. “We are presented with opportunities and choices. What we choose to do can make all the difference in the world. Mother Mary Katherine came from nothing and I find that incredible.”