Team gets firsthand look at living conditions for immigrants in detention

View from the sanctuary of University Presbyterian Church in El Paso, Texas. Photo by Teresa Waggener.

Between 60 and 86 nationalities are represented behind the walls of the ICE Montana Facility in El Paso, Texas. It is one of six in the country that is run by Immigration and Customs Enforcement (ICE). Men and women of all ages and backgrounds, some seeking asylum in the U.S., are currently detained there, waiting and hoping they’ll be given an opportunity to start a new life or remain with their families in the U.S.

Two staff members from the Presbyterian Church (U.S.A.)’s Office of the General Assembly recently visited the facility while along the U.S. Mexico border. Amanda Craft, manager of advocacy with the OGA’s Office of Immigration Issues and Teresa Waggener, OGA’s immigration attorney, were allowed access to see firsthand how men and women are living and coping in the federally-run facility.

“There was a mixture of folks in the facility. Some had just been arrested along the borders, others were in the asylum process, and others had resided in the United States for many years and were in removal proceedings,” said Craft. “However, it was shocking to see the colored jumpsuits detainees wear, to witness the restrictive rhythm of their existence, to understand that this was a punitive holding facility.”

Craft says the tour was conducted by an ICE official as well as the facility spokesperson.

“This experience was a precursor to what we saw on the international bridge between Ciudad Juarez and El Paso,” she said. “The same people waiting on the bridge to enter the United States to apply for asylum were reflected in the faces in the many we saw at this facility. Being detained means that the opportunity to speak with anyone in the outside world is extremely difficult. It slows down the entire process and makes it almost impossible to win asylum.”

Craft and Waggener say the tour guides gave a “positive spin” to how the residents are treated at the facility. 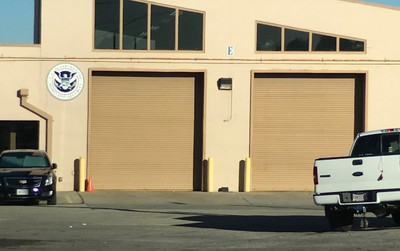 Entrance to the ICE Montana facility in El Paso, Texas where men and women seeking asylum are detained. —Photo by Teresa Waggener.

“They have a cafeteria and the people here receive meals totaling 3,500 calories a day,” said Waggener. “They have a law library to look up their legal case. They have religious observances as well as a recreational center.”

Despite the “bells and whistles” presented to the team, Waggener says it didn’t change what they saw.

“This, being a federally run facility, is probably one of the better immigration detention centers as it is not for profit. Therefore, it is probably true that the medical care and food is better. It is probably less likely that people will suffer abuse at this facility,” said Waggener.  “But people in this ICE prison have lost their liberty. There are tall fences with concertina wire surrounding them. Everywhere we went, we were buzzed in through heavy magnetized doors. As a former public defender, I can tell you it is just like every state prison I’ve ever been in.”

There are three levels of security at the center and those living there are dressed in jumpsuits based on their classification. Those dressed in blue had irregular entries, orange indicates low-level immigration and/or criminal offenses, while those dressed in red are considered serious offenders or behavior problems.

“Immigration court does review cases at the facility. There are courtrooms. We saw attorneys going in and out and they attended hearings,” said Craft. “But individuals could be in detention for years. There are times attorneys will show up at the facility and find out their client has been moved to another detention facility in another state and they weren’t notified.”

Waggener expressed concern about the people inside the facility and their access to due process.

“While in the booking area, we learned that each individual could have 40 pounds of personal items kept for them in inventory, just the size and weight of a carry-on item that could be taken with them if they were deported on a flight with ICE Air,” she said. “It seemed as though deportation was a foregone conclusion. This concern was solidified for us later, when we met with attorneys who serve the El Paso area. They showed us the Executive Office of Immigration Review statistics for this facility. Only two percent of asylum-seekers prevail.”

That same report shows that other cities like Baltimore and Boston have a grant rate of 63 to 78 percent.

Craft and Waggener were told that people are given the opportunity to work if they choose, for a dollar a day. Some choose to work to keep themselves busy and are dressed in yellow jumpsuits to distinguish them from others.

With the administration’s proposed changes in the asylum process, it is uncertain if all asylum seekers will be held in facilities such as these or if the government will continue to release some to pursue their claims from a place of freedom. With hopes that releases will continue, various groups working to support asylum seekers are preparing for the arrival of the migrant caravan or Central American Exodus.

As many as 7,000 could reach the U.S. border in the next few weeks as they make their way from Honduras and El Salvador.