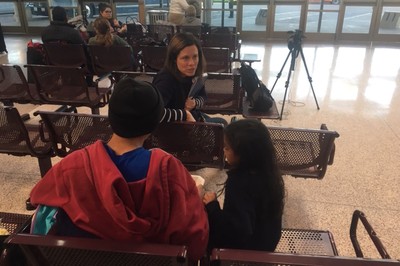 Amanda Craft, manager of Immigration Advocacy with the PC(USA) Office of the General Assesmbly, meets with a father and daughter at the McAllen, Texas bus station. —Photo by Rick Jones

On a warm June day last summer, a small group of volunteers found 40 asylum seekers camping out on the Reynosa-Hidalgo bridge near McAllen, Texas. From that day forward, the mission was clear: help people in need.

Angry Tías and Abuelas (aunts and grandmothers) of the Rio Grande Valley has spent the last six months working to make sure asylum seekers have what they need to start over in the U.S. Blankets, food, water, toiletry kits and toys make up the list of supplies provided to families either waiting on a bridge to enter the U.S. or preparing to board a bus to other destinations.

A delegation from the Presbyterian Church (U.S.A.) just returned from visiting the Texas/Mexico border, where it met with asylum seekers and ministry groups like Angry Tías to learn more about what they’re doing to make the new arrivals feel welcome.

“Just reaching out with a hug can make a difference in that adult or child’s life and going beyond that to be sure they know where they are going and how long it’s going to take,” said Joyce Hamilton, an organization founder. “We will provide support for them along the way. We may provide a doll or stuffed animal to a child, handing the parents an envelope with cash so they can feed themselves for the two or three-day trip.”

Hamilton is a ruling elder from Treasure Hills Presbyterian Church in nearby Harlingen. She says it didn’t take long for the volunteers to recognize the need for ministry.

“It’s the knowledge that people who have been hurt and damaged are in need. You see it in their faces, the gratitude. It’s really heartbreaking,” she said. “I wish they didn’t have to be humbled like this.  It’s families with children and we can’t imagine the crisis they’re going through.”

The delegation caught up with Hamilton at the McAllen bus station, where volunteers were working to help a father and young daughter catch a bus.

Angry Tías and Abuelas - McAllen, Texas from Office of the General Assembly on Vimeo.