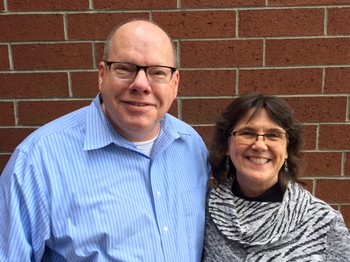 Chantal Atnip, a ruling elder from the Presbytery of Carlisle, who announced last fall she is standing for Moderator of the 223rd General Assembly (2018), has named the Reverend Ken Hockenberry, a pastor in the Presbytery of Chicago to be her Vice Moderator running mate.

Atnip said she recently circulated the GA223 commissioners list to friends and supporters “and the one common denominator among all the responses was Ken Hockenberry.” She said when she approached him about being her running mate, “I half expected him to laugh at me but he didn’t. As we talked over the ensuing week, we found we have similar views and similar senses of humor, which is very important.”

A New Jersey native, Hockenberry graduated from PC(USA)-related Grove City (Pennsylvania) College and Princeton Theological Seminary and has done doctoral work—as well as serving on the staff and faculty of Louisville Presbyterian Theological Seminary. Since February 2016, he has served as interim pastor of Carter-Westminster United Presbyterian Church in Skokie, Illinois. His wife, Judy, is also a pastor in the Presbytery of Chicago.

“I never considered standing as Moderator,” Hockenberry said in an interview with Mike Givler, communications coordinator for the Synod of the Trinity. “I’m new to Chicago Presbytery, and I was asked to submit my name to stand for commissioner, and to be honest I didn’t think I would get it. I figured I’m new to this presbytery, I probably won’t be elected. I was really quite surprised when the vote was announced.

“I bring an experienced presence and longtime service in the Presbyterian church,” Hockenberry said. “I’m a cradle Presbyterian and I have a high commitment to the church. I bring a calm, seasoned wisdom to how the church can be effective in mission and ministry.”

Prior to going to Skokie, Hockenberry served for twenty-one years as pastor of Beulah Presbyterian Church in Louisville. From 1996–2014 he also served as stated clerk of the Presbytery of Mid-Kentucky. A familiar figure at General Assemblies, he has served as parliamentarian, an assembly committee leadership team member, and coordinator for floor parliamentarians at General Assemblies since 1998.

“I’m thrilled to have Ken as my running mate,” Atnip said. “We bring ruling elder-teaching elder balance and a choice of leadership models to the assembly. Ken has a solid understanding of process. I completely trust his judgment and feedback.”