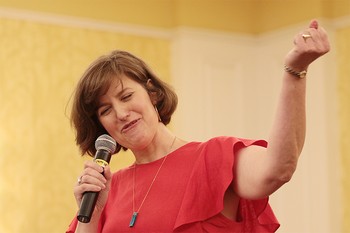 Jill Duffield, editor of the Presbyterian Outlook, celebrates the 200th anniversary of the magazine. —Photo by: Danny Bolin

For 200 years, the Presbyterian Outlook has spoken out boldly on issues in church and society, Outlook editor and publisher Jill Duffield told an overflow crowd of subscribers and supporters of the magazine at the 223rd General Assembly of the Presbyterian Church (U.S.A.).

“We were and are a mixed bag,” Duffield said, citing positive and negative examples from the magazine’s history including an editor who promoted temperance while publishing ads for alcoholic beverages. “And yet God has worked through us.”

Celebrating 200 years of ministry was the central theme of the Presbyterian Outlook luncheon on June 16, the opening day of the Assembly. The magazine was started in 1819 by three Presbyterian ministers in Georgia and merged with two other publications in 1944.

Though “much has changed” since that time, Duffield said in a letter to supporters, the church and society still benefit from a free press. Duffield also noted “the power of words” to “shape the course of history.”

Like other publications, the Outlook has faced economic challenges while attempting to speak faithfully to the injustices roiling church and society. Looking back at past successes and failures can inspire a vision for the future, Duffield said.

“I need to know that our work matters,” she said, “that our attempts at faithfulness matter.”

Sharon Blount, president of the Presbyterian Outlook board, encouraged supporters to pray, subscribe, and send monetary gifts to the magazine.

Following the tradition of previous Assemblies, the Outlook luncheon offered candidates for moderator the opportunity to speak briefly about their visions for the church.