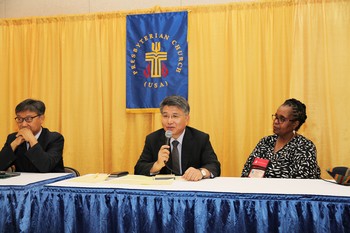 (Left to right): the Rev. Kyoung-gyun Han, the Rev. Jaecheon Lee and the Rev. Robina Winbush speak during a press conference of Korean Church leaders at 223rd GA (2018) —Photo by: Danny Bolin

After the June 12 Singapore summit between U.S. and North Korean heads of state, South Korean church leaders say they’re increasingly optimistic about the chances of reunification up and down the Korean peninsula ― of nations and of families.

“Because of your presence, we Korean churches can sustain our long march toward peace and reunification,” the Rev. Jaecheon Lee, general secretary of the Presbyterian Church in the Republic of Korea (PROK), said during a General Assembly news conference Saturday. “I am pleased to talk about how you have stood by my church for a long time.”

The Rev. Kyoung-gyun Han, ecumenical officer for the Presbyterian Church of Korea (PCK), was a military chaplain in the late 1990s when North Korean soldiers attacked their southern counterparts.

“This summit was a kind of miracle,” he said. “I thank God for those who have supported peace. Without your support and prayer, it wouldn’t happen. We are about to move forward.”

The Rev. Robina Winbush, associate for ecumenical relations in the Office of the General Assembly, said the involvement of the Presbyterian Church (U.S.A.) began with the Rev. Syngman Rhee, a former General Assembly moderator, with a focus on family reunification.

Over the past three decades, organizations including the World Council of Churches and the World Communion of Reformed Churches have launched Korean peace-building efforts that envision full democratic participation for Koreans from both countries.

“Since 1988, Koreans have been claiming that as a key factor for reunification,” Lee said. “All the people ― not just the important political figures, all the people ― must be guaranteed the right to participate. It means that God is asking us as God’s people to participate in God’s history, the building of peaceful coexistence.”

President Donald Trump and North Korean supreme leader Kim Jong-un “are doing their work, but we are going to do what we have to do as God’s people,” Lee said. “That is the Korean church’s basic duty. God wills us to do something for peace.”