Cintrón-Olivieri/Kohlmann plan to do things

Humbled and overjoyed is how the new co-moderators of the 223rd General Assembly said they felt after Saturday night’s close election. Appearing at their first news conference, Ruling Elder Vilmarie Cintrón-Olivieri and the Rev. Cindy Kohlmann said the last few months have been “an incredible journey” and they are ready to move forward. 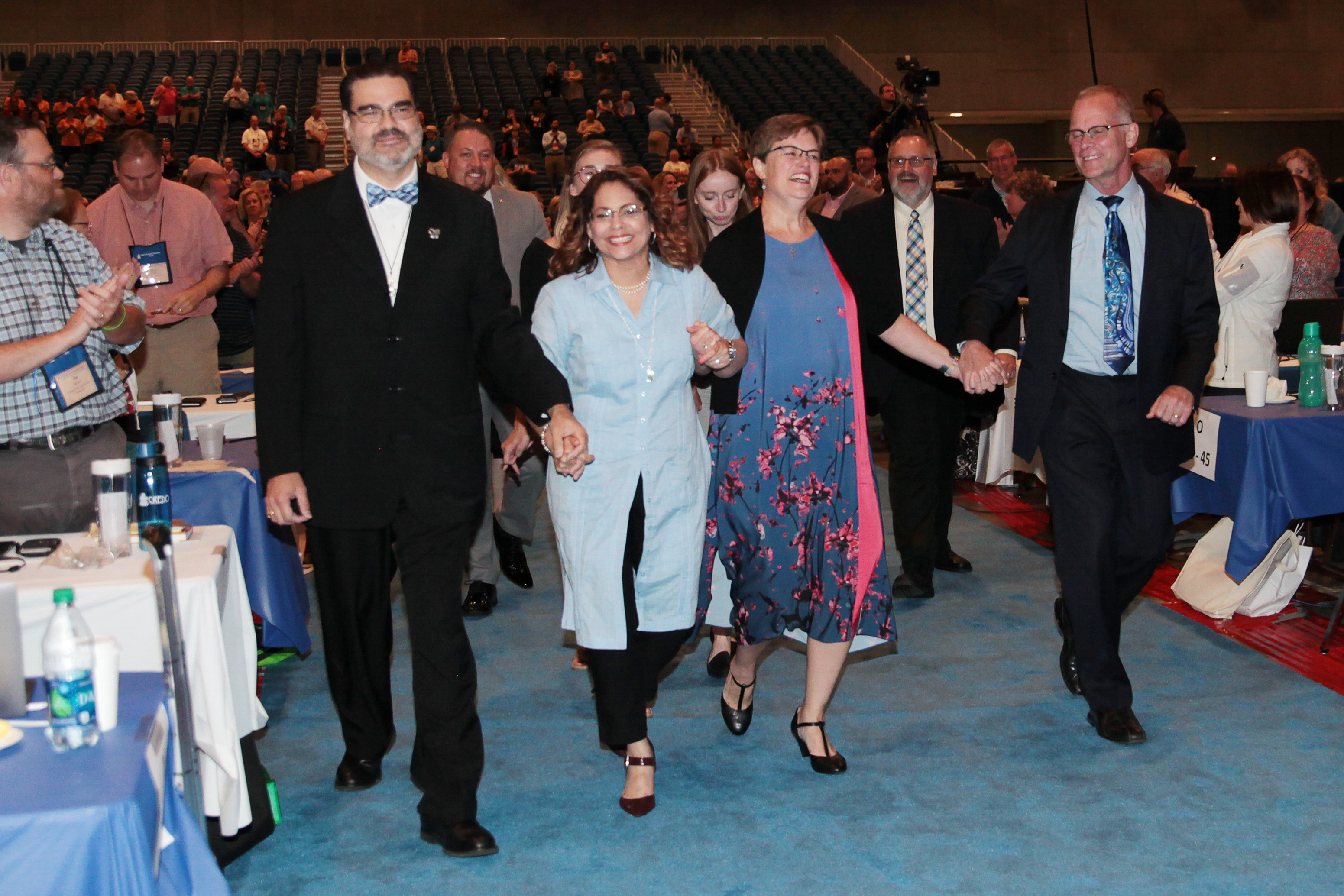 Vilmarie Cintrón-Olivieri (center-left) and Cindy Kohlmann (center-right) enter the plenary hall after their election as co-moderators. (Photo by Danny Bolin)

“We will be surprising and do things in ways the church hasn’t necessarily experienced before,” said Kohlmann. “Some of that will be around the expectations of who should do what. Who should preach? Who should show up at clergy or ruling elder conferences? We want to do things that we feel called to, not necessarily what traditional expectations might want to dictate.”

The pair were among three teams of candidates seeking to succeed Co-Moderators Denise Anderson and Jan Edmiston of the 222nd General Assembly.

“We thought all of the candidates could do this job,” Cintrón-Olivieri joked. “I appreciated the collegiality, love and hope that was shared across the teams. It was a good journey and we appreciated the opportunity to stand with them. I thought it was a fair process and spirit led. If it took four ballots, that’s what the spirit wanted.”

Cintrón-Olivieri, who grew up in Puerto Rico, is an ESL teacher and ruling elder at First Spanish Presbyterian Church in Miami. Kohlmann currently serves as Resource Presbyter for the presbyteries of Boston and Northern New England.

Introduced by a mutual friend, the newly-elected pair believe their different backgrounds will serve them well as they look to address diversity in a changing church.

“Music is one of the places where we can be diverse and united,” Kohlmann said. “We have immigrant communities in the greater Boston area. When I worship with them, it doesn’t matter that I don’t understand a single word we sing together,” she added. “Part of celebrating diversity is helping people experience it in a way that is joyful and life giving.”

“There is a way to do worship that might be simpler than we think,” said Cintrón-Olivieri. “Perhaps an interpretation system or presenting music and preaching in a different language. We just need to find the people to do that.”

Both believe placing more emphasis on people and less on buildings will make a difference.

“If the church building wasn’t there, there would not be a place for community to be together,” said Kohlmann. “It’s not about leaving the building behind. It’s about not making the building the first thing we talk about in annual reports. It’s what we use to do the mission of Christ.”

Cintrón-Olivieri says churches are using their facilities in new ways to connect with communities.

“We need to think outside of the box and look for ways to make the building the center of community,” she said. “We need to determine how it can be a safe space where people gather for worship on Sundays and for other purposes during the week.”

Both have embraced what the church is doing to welcome immigrants to the United States and believe it is a “rich blessing” for the PC(USA).