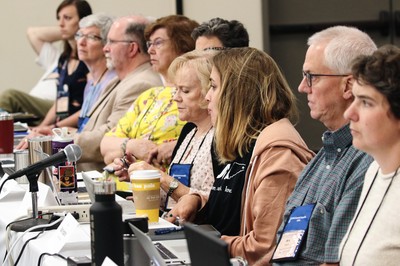 A guide to just compensation for ministers was approved unanimously Monday by Assembly Committee 13 of the 223rd General Assembly.

Living by the Gospel: A Guide to Structuring Ministers’ Terms of Call was prepared by the Board of Pensions (BOP) for mid-councils, committees on ministry, committees on preparation for ministry, search committees and congregations.

Included in the document is a strategy to address the growing number of small churches that can’t afford pastors and the growing number of ministers ordained to calls that do not provide BOP benefits. It offers substantially reduced dues for pastors under 40 who have not previously been enrolled in the benefits plan and who are called by a congregation of 150 or fewer members that has not had an installed pastor in the past two years.

This makes sense for “ecclesiastical and economic reasons” alike, said John McFayden, executive vice president and chief of church engagement for the BOP. “It encourages development of leaders who will provide many years of seasoned leadership in the church.” McFayden said research shows that “ministers who are in the benefits plan, who have resources to guide their well-being, are more likely to stay and grow in ministry.”

The focus on younger members reflects the lower cost of providing benefits to this group, he added. “Economically, it just works.”

Living by the Gospel notes that, over the past 10 years, more women have been ordained than men, but men have received benefits at a far higher rate. To address gender disparity, Committee 13 also approved a comment urging presbytery committees on ministry to study and adopt the theology of benefits included in Living by the Gospel.

Topics: Board of Pensions