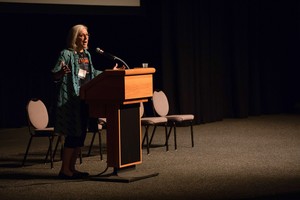 ST. LOUIS — While introducing the first of two Bible studies at the 223rd General Assembly (2018) of the Presbyterian Church (U.S.A.), Deborah Krause, academic dean and professor of New Testament at Eden Theological Seminary in St. Louis, talked about “space theory.” She described space theory, or space criticism, as a new way of reading the Gospel of Mark and other New Testament writings.

“It emerges out of our experience here in St. Louis of the tragic shooting of Michael Brown by police,” she explained. In the wake of the shooting, “for my students and me, the Bible became a kind of pop-up book. We found the Bible could give us a sense of urgency to move us to work for social justice and transformation.”

Krause titled her study “A Monumental Reading of Mark: Resisting Domination and Building the Kindom of God.” She explained that kindom, a term introduced by Cuban theologian and ethicist Ada María Isasi-Díaz, is an alternative to the hierarchical structure implied by the term kingdom.

“Mark’s Gospel offers us a new space to be transformed,” Krause said. “Mark was not written as a historical record but constructed by a pastoral theologian to provide space for learning what it means to follow Jesus.”

Written in the shadow of the Roman Empire, where the Jewish people were confronted daily with monuments of their defeat, such as the Arch of Titus, Mark’s Gospel offered “a kind of virtual experience as an alternative to those demeaning structures,” Krause said.

In Mark, Jesus moves from space to space — from Galilee to Jerusalem — proclaiming the kindom of God. He resists and reimagines the structures of empire as embodied in religion, households and families. For example, he chides religious leaders for allowing the temple to become “a place of exploitation” instead of a house of prayer. And he calls his disciples to leave their households, or family businesses, to follow him.

“Jesus was not a family kind of guy,” as Mark presents him, Krause said.

Romans 12:1–2 offers another example of how the New Testament writings resist and reimagine the structures of empire. As Krause translated the passage, Paul tells Christians, “Do not be pressed down into the mold of this world.”

“Paul is saying, ‘Don’t become a brick in this system,’” Krause said.

She urged listeners to “resist the mashing down of empire” today by “interrogating” our spaces. “Drive the streets of our cities. Pay attention to how they are structured. Where do we see disparities? Where are people demeaned, degraded and destroyed by the structures of this world?”

Structures in families, society — and even the church — can keep Christians complicit with the power of empire, Krause said. “In the process of keeping our families safe and keeping our economy robust, who are we destroying and demeaning?”

In closing, Krause displayed a slide showing two iconic monuments in St. Louis: the Gateway Arch and the old courthouse. She pointed out that the arch is “a national monument to Westward expansion,” which led to the degradation of native people. The courthouse was the site where African American slaves Dred and Harriet Scott appealed for freedom and won their case, only to have their freedom later rescinded by the U.S. Supreme Court in the infamous Dred Scott decision.