Panelists from South Sudan, Pittsburgh talk about working in tandem 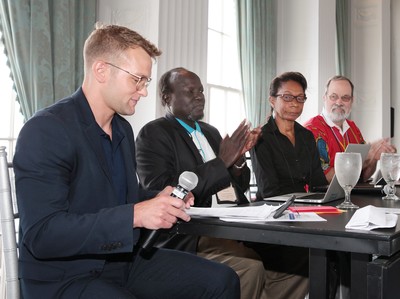 Speaking at Monday’s World Mission Luncheon, the leader of partner church, a mission co-worker, and a U.S. Presbyterian pastor talked about ways mission in partnership has transformed them.

Rev. John Yor Nyiker, general secretary of the Presbyterian Church of South Sudan, spoke about the deep friendships he had made with U.S. Presbyterians involved in mission partnerships in his country.

He spoke about how he was supported by U.S. friends after the death of a family member.

“They prayed for me and encouraged me, and it gave me hope,” Nyiker said.  Referring generally to doing mission in partnership, he said, “Partnership has changed my life, given me strength and allowed me to continue the work of God”.

Leisa Wagstaff, a mission co-worker in South Sudan, told about the time in 2016 when interethnic violence reached her community. A South Sudanese friend risked her life to bring water and food, and other South Sudanese called to check on her.

She eventually left the country for a time to escape the violence, she said. “Then I came back, and there was an affirmation that I was one of theirs.” Wagstaff explained that the South Sudanese knew that she had left reluctantly, and were pleased that she was one of the first expatriates to return.

The Rev. Dave Carver, pastor of First United Presbyterian Church of Crafton Heights in Pittsburgh, said participating in mission partnerships in Malawi and South Sudan breathed new life into his urban congregation. When he became pastor 25 years ago the congregation was struggling and was focused on what kind of help they could receive. Mission partnerships, he said, helped change that attitude.

“It is so refreshing to learn that you can be a giver, and that you have something to share with your neighbor,” he said.