Home News ‘Can we give a little grace to one another?’ asks UCC officer

‘Can we give a little grace to one another?’ asks UCC officer 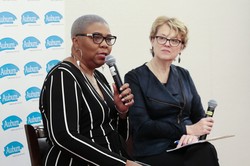 ST. LOUIS — A stirring rendition of “Oh Freedom” by the Rev. Dr. Derrick W. McQueen set the tone for Auburn Seminary’s biennial breakfast Monday, which celebrated the 200th year of Auburn’s witness, notably its focus on racial justice and peace.

McQueen, a member of the seminary’s board of directors and pastor of St. James Presbyterian Church in Harlem, said he offered the spiritual to mark Juneteenth, the day — June 19 —that commemorates the end of slavery in the United States.

Following brief remarks by Heath Rada, moderator of the 221st General Assembly (2014) and a member of Auburn’s board, and the Rev. Dr. Katharine Rhodes Henderson, the seminary’s president, Henderson introduced and engaged the breakfast’s featured speaker, the Rev. Traci Blackmon, in a forthright dialogue on topics ranging from Ferguson to the lack of denominational unity to what it means to be a Jesus-centered church to a future beyond white supremacy. 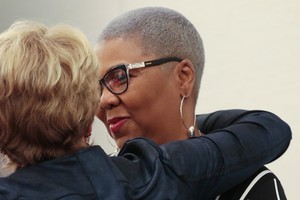 “Unfortunately, one doesn’t have to see well to tell what time it is in America right now,” Blackmon said in response to Henderson’s assertion that prophets are “supposed to be readers of the signs of the time.”

“There appears to be a mighty rising and a surging of intolerance and hatred,” she continued. “I believe what we are seeing is the death battle of white supremacy. When something is dying, it uses everything it has to fight for life.”

Speaking a word directly to the Presbyterian Church (U.S.A), Blackmon said that she “would be worried about the church, but for God.”

“The task of all denominations is the same,” she added. “We have often divided ourselves by what is different about us. We must be unified. Because we lack that unity, there is one voice right now that is speaking for all of faith and giving us a bad rap.”

Asked by Henderson what it means to be a Jesus-centered church, Blackmon urged preachers “to be careful not to be driven by the next headline.”

“While we’re asking people to leave church because they don’t preach about Jeff Sessions, what about the person who finally came to church yesterday to hear about God?” Blackmon said. “If your preaching is Jesus-centered, you have to do some abnormal stretching to preach about Jesus and not preach about justice. If we’re preaching about Jesus, then the Word is central and centers the people.”

Blackmon ended the dialogue with observations about “loving blackness” and a future beyond white supremacy, noting that she is hopeful and believes in redemption.

“We must always be cognizant that the evil we fight ‘without’ is also the evil we have within,” she cautioned. “As long as we can remember that, then God can work with the mess we have.”

Blackmon asked, “What do we do with white people who want to change the world in a world that has been crafted for their comfort, to help them see the water that they swim in?” Reflecting on that question, she said, “Just because I am black and race is not a thing at all … there are places where I am privileged and I have to challenge myself about the water I swim in. I have to always be reminded that being a Christian is a privilege in the United States.”

She closed with a word to congregations involved in such initiatives as diversity training to “make space for grace.”

“Give yourselves the opportunity to get it wrong,” Blackmon said. “Give yourselves the forgiveness to say out loud what you’re thinking so we can get through what they’re thinking. We major in grace. We preach grace. We teach grace. We give grace to the stranger. Can we give a little grace to one another? Can we assume that those who showed up for diversity training, if they showed up, that they care? Even if they are 50 and say the wrong word, can we assume that they care?”

The breakfast closed with a screening of Auburn’s video, For Such a Time as This, and prayer by the Rev. Mark Hostetter, chair of the seminary’s board.