Home News Committee unanimously recommends the confirmation of the Rev. Diane Moffett as head of PMA

Committee unanimously recommends the confirmation of the Rev. Diane Moffett as head of PMA 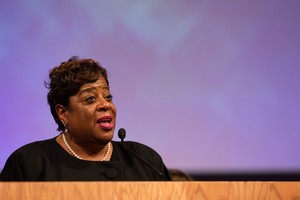 The Rev. Diane Moffett at the 223rd General Assembly of the Presbyterian Church (U.S.A.) in St. Louis on Saturday, June 16, 2018. —Photo by Michael Whitman

Nancy Ramsay, chair of the search committee that recommended Moffett to the PMA Board, called her “an adaptive and transformative leader” who has a “passion for mission.” The board elected Moffett on May 8 for a four-year term, but her election is subject to confirmation by the General Assembly.

In her remarks to the committee, Moffett emphasized that the need for the agency to be faithful to its “deep call from God.”

“Jesus gave it all, and he requires no less for us,” she said.

Moffett also said she would “bring to the work the importance of relationships with God and with each other.”

Asked about her thoughts on the PC(USA)’s international witness, Moffett said, “We have a treasure in the gospel of Jesus Christ and we need to share it. We need to listen, learn and then lead.”

The committee also recommended that the General Assembly urge denominational entities to confess their complicity in the “Doctrine of Discovery” and to repudiate the doctrine.

The doctrine is a legal concept that US courts have used to invalidate or ignore the possession of land by Native Americans.

The recommendation asks that sessions, mid councils, seminaries, Presbyterian Women’s groups and other organizations address the issue. It also calls on the PMA to develop related resources, and it encourages Presbyterian schools and seminaries to prepare students to articulate Native American theologies.

The action was placed before the committee by the PMA, which was acting on a referral from the 222nd General Assembly (2016).

“The Presbyterian Church has played a role in the implementation of this doctrine,” said the Rev. Irv Porter, the PMA’s associate for Native American Congregational Support. “We stood by while Native Americans were killed and their land was taken.” The recommendation passed by a vote of 47–0 with three abstentions.

In a related move, the committee approved an overture by the Yukon Presbytery that expanded the committee’s initial action on the Doctrine of Discovery. For example, it lists several theological issues that PMA resources should explore.

“How is it that Christians took land and somehow thought that this was a Christian ethic?” asked the Rev. Curtis Karns, an overture advocate from Yukon Presbytery.

The committee also sent to the full Assembly an overture from Grand Canyon Presbytery concerning the conditions of buildings where Native American Presbyterians worship.

Clyde Parks, an overture advocate from Grand Canyon Presbytery, said many Native American church buildings have serious structural problems. Some, he noted, are heated by wood or coal-fired stoves. The overture asks the PMA to conduct an inventory of maintenance needs.

“We don’t do this work normally,” said the Rev. Rhashell Hunter, director of Racial Ethnic & Women’s Ministries for the PMA. The committee voted to direct the PMA to work with mid councils to facilitate the assembly-wide assessment of the 95 Native American congregations and chapels.

While no commissioner voiced opposition to helping Native American congregations, some expressed concern over the inventory’s $302,217 estimated cost over the next two years.

“I am completely supportive of the intent, but I don’t think we can afford the overture the way that it is written,” said the Rev. Martin McGeachy, a commissioner from Hudson River Presbytery.

In addition to the inventory, the overture says that “a means must be established to match identified projects with teams of volunteers capable of making the repairs.”

In other action, the committee recommended that the denomination explore the need to create an advocacy committee for LGBTQ+ concerns. The measure was brought to the committee by the PC(USA)’s Advocacy Committee for Women’s Concerns.

In recent years, the denomination has changed its policies to allow the ordination of individuals who are in same-gender relationships and to permit Presbyterian clergy to officiate the weddings of same-gender couples.

Noting the growing role of the LGBTQ+ individuals in the denomination, JoAnne Sharp, a member of the Advocacy Committee for Women’s Concerns, said, “Let us be proactive as we experience the growing pains that we will face.”

The action directs the Advocacy Committee for Women’s Concerns to create a five-member task force to study the need.