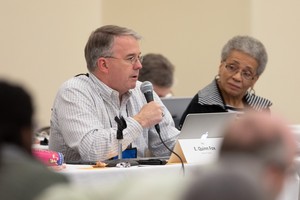 The Rev. Abbi Heimach-Snipes from Chicago spoke of being newly pregnant. The congregation she serves has a six-week paid leave policy, but she’s learned that it can be dangerous for a mother to return to the workplace and a child to enter day care that soon. The Rev. Dawn Black of Terre Haute, Indiana, said she believes that returning to work too soon did so much damage that she ended up needing a hysterectomy. Both women believe the standard should be 12 paid weeks of leave.

The Rev. Susan Andrews, moderator of the 215th General Assembly, pointed out that in 1978, she was fortunate to receive parental leave because no standard leave policies existed. Forty years later, leave policies are still piecemeal across the denomination.

The Rev. Bethany Benz-Whittington of Colorado summed up the many trauma stories shared in person and across social media. Inadequate leave is not the exception, she said, it is the rule.

The committee needed no urging to strongly support the concept of paid leave for new parents, and for broader family leave. “Everyone here is in favor of some form of paid family leave,” said committee Moderator Ruth Huff. “We’re having difficulty crafting something that does what we want it to do and has some muscle.”

The bottom line is, it’s complicated.

Earlier in the day, the committee easily passed a resolution to require and expand family leave policies that came from the Advocacy Committee for Women’s Concerns. If adopted by the Assembly, this resolution would require all agencies to adopt adequate family leave policies and would urge synods, presbyteries and congregations to create policies for at least eight weeks of paid leave and an additional four weeks of unpaid leave.

The committee spent hours attempting to find ways to mandate a standard churchwide leave policy, while running into constitutional and benefits policy roadblocks.

Susan Reimann, executive vice president and chief operating officer of the BOP, pointed out that adding family leave salary continuation benefits would increase medical dues. This could also have the consequence of creating a gap between pastors in the plan and other employees. The BOP estimates that adding this benefit could cost as much as $5 million per year.

The committee finally adopted a recommendation to appoint a task force to study and develop recommendations to report back to the 224th General Assembly.

In other business, the committee vigorously debated an overture from the Presbytery of Monmouth that would allow congregations to commission individuals as ruling elders without requiring them to assume a seat on the session. Although the overture was recommended for disapproval by the Advisory Committee on the Constitution, overture advocate Carlos Wilton maintained that this measure would not be a departure from tradition, but an expansion of vision.

After hearing of situations when the spouse of a pastor, educator, community organizer or leader of a new worshiping community could not serve as a ruling elder due to the requirement of service on a session, the committee approved the overture to send on to the Assembly.

Pamela Anderson, a teaching elder committee member from Sacramento, summed it up: “I think it’s time. It’s time for us to get creative. It is time to get out of the box, and explore new ways of doing church,” she said.