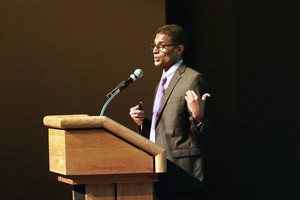 In terms eerily similar to today, Raj Nadella, assistant professor of New Testament at Columbia Theological Seminary near Atlanta, described the Roman empire of the first century — the context of New Testament Christianity — in the second of two Bible studies at the 223rd General Assembly (2018) of the Presbyterian Church (U.S.A.).

In Matthew 14, a king (Herod) hosts a lavish birthday banquet that ends in the grisly beheading of a prophet (John the Baptist) committed to a life of poverty. Herod represented an oppressive system in which people were taxed to build new cities to dedicate to the emperor of Rome.

People at the top had great wealth, but “all these massive building practices were coming at great cost to the poor people in Galilee,” Nadella said. He reminded listeners of the Old Testament story in which the Israelites begged God for a king because they thought that a king could make them “a great nation.”

As it turned out, Nadella said, life under kings and emperors turned out to be “oppressive, greedy and real bad.”

The term “imperial paradox,” he said, refers to the disconnect between Rome’s stated values of peace and prosperity for all and the realities of life in the empire. “In order for people at the center to enjoy wealth, it’s OK for people on the margins to live in poverty. In order for there to be peace in the capital, there must be war in the outlying colonies.”

Worst of all, “Rome used religion to justify the paradox” by proclaiming that “the gods themselves sanctioned these oppressive economic structures,” Nadella said.

Later in Matthew 14, a very different kind of banquet occurs. In contrast to Herod’s banquet for the elite, Jesus’ feeding of the 5,000 is a meal for the poor. Instead of resources being moved from the margins to the center, as in the Roman empire, food is moved from Jesus out to the hungry people, Nadella said.

Soon after, in Matthew 15:21–28, Jesus encounters a Canaanite woman who asks him to heal her daughter. Acknowledging that Jesus’ response to her is puzzling, Nadella said Jesus was reflecting the “zero-sum worldview” of Rome by implying that food (and healing) could not be shared among enemies.

“Rome not only perpetuated poverty at the margins, they convinced marginalized communities that they could only survive at the expense of the other,” he explained. “People in power have a way of designing narratives that are a way of deflecting attention away from oppressive structures.”

Ultimately, Jesus commended the Canaanite woman for persisting and challenging the zero-sum mentality. Christians today should “get on the phone and be persistent — like the nasty Canaanite woman — until we get what we want,” Nadella said.

“A church that supports the empire is an absolute contradiction in terms.”