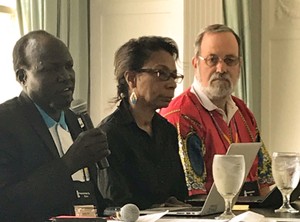 The Rev. John Yor (left) speaks to the World Mission luncheon at the 223rd General Assembly. —Photo by: Danny Bolin

The Reverend John Yor, General Secretary of the Presbyterian Church of South Sudan (PCOSS), who is serving as an ecumenical representative to the 223rd General Assembly, has been sharing stories of hope from his war-torn country.

The South Sudan Council of Churches — on whose executive committee Yor serves — has been an effective advocate for peace at the High-Level Revitalization Forum (HLRF), convened by the Intergovernmental Authority on Development (IGAD) in Addis Ababa, Ethiopia.

The Forum was set up in June 2017 in an effort to revive a December 2015 peace agreement, known as the Agreement on the Resolution of the Conflict in South Sudan (ARCSS), which began to founder just months after it was signed.

However, the HRLF has achieved little after several rounds of talks. During the most recent session in May, IGAD Special Envoy Ambassador Ismail Wais appealed to the Church to help the participants to find common ground on ten key governance and security matters.

As Presbyterian News Service has reported, the South Sudan Council of Churches (SSCC) set up multi-party committees to discuss the outstanding issues, each of which was chaired by a Church leader and supported by local and international resource people.

“In general, positions began to shift and compromises were starting to be made, though the going was slow and the challenges were many,” the SSCC reported. “[T]he mood was … often tense, but always respectful both of the Church and of the parties for each other. Many stressed that the solution could only come from the South Sudanese themselves.”

Both inside and outside of the meeting, church leaders were actively engaged in trying to close the gap between the parties. “One representative of the Presbyterian Church of South Sudan was able to participate in the peace talks and some pastors from the church were able to contact the parties individually outside the roundtable meeting,” Yor explained.

While the churches were not able to bring the process to a conclusion before the last round of talks ended on May 23rd, the progress achieved — in building renewed commitment to the cantonment of troops and the cessation of hostilities, for example — has created a foundation for future agreement.

“Many actors subsequently commended the church for its efforts in generating a more positive atmosphere,” the SSCC wrote. “According to one, … ‘More progress was made in four days by the Church than in the IGAD process of the last year.’”

All of the parties and stakeholders have asked that the Church continue to lead the process into the next round. Yor believes it will be helpful to have more church leaders included in the peace talks in the future, and he thinks it will also be good to invite the Muslim community to participate.

“In South Sudan, we talk about the importance of faith-based groups in peace building,” Yor observed, “but in this case the Muslims did not participate. I hope that next time they will be included with the faith-based groups — the Islamic Council and the South Sudan Council of Churches both — so they can have a more effective role in the peace talks.”

The HLRF was originally scheduled to resume at the end of June, but a new IGAD initiative to convene a face-to-face meeting between President Salva Kiir and opposition leader Riek Machar may delay the reconvening of broader talks.

Yor has encouraged the PC(USA) to pray for the peace talks to resume and for God to strengthen and guide the Sudanese churches as they continue their  crucial role of peace building.

He also asked that we combine our prayers with advocacy. “Advocacy is an important part of the partnership between PCOSS and PC(USA),” Yor remarked. “If we cry out in South Sudan, our voice cannot be heard in the United States or by the U.S. government. But the PC(USA) Office of Public Witness can speak to U.S. officials on our behalf and encourage them to work to bring a lasting peace to South Sudan.”

The 223rd General Assembly will consider an overture on “Support and Prayer for the Church and People of South Sudan”, and Yor will be speaking to the committee considering this overture. He will also share about the grassroots work in which PCOSS is engaged through the South Sudan Education and Peacebuilding Project in a workshop he and Leisa Wagstaff will present at 1:30 p.m. on Wednesday afternoon in the General Assembly Exhibit Hall.