Speaker invites luncheon group to turn over the tables 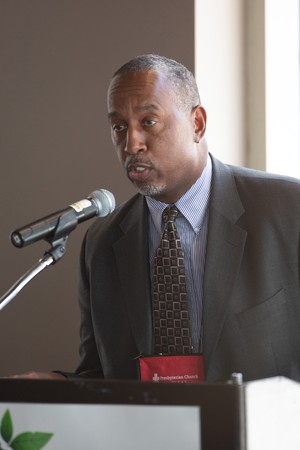 “We’re going to be nice Presbyterian radicals,” the Rev. Jimmie Hawkins said. “The same savior who saved us is the one who overturned tables.”

Hawkins, who directs the denomination’s Office of Public Witness in Washington, D.C was the featured speaker at Tuesday’s Presbyterians for Earth Care Luncheon during the 223rd meeting of the General Assembly of the Presbyterian Church (U.S.A.)

Hawkins, whose address was titled “The Poor People’s Campaign: A National Call for Moral Revival,” can see from his office next door to the U.S. Supreme Court, witness the oppression of the poor anytime he drives through the District of Columbia, and knows the connection between poverty and environmental disaster.

He pointed out that 13.8 million U.S. households have no access to clean water.

Led by the Washington Office, Presbyterians have been gathering weekly to witness to poverty related themes such as systemic racism, ecological devastation, war economy and militarism and national morality.

“Every week we begin with worship,” he said. “Then on Monday people get arrested. On Tuesday, there is a teach-in. And on Thursday, there’s a celebration of hope.”

Hawkins told the group that the church is in a place today where Christians must make decisions about the call to follow Jesus in his roles as preacher, teacher and healer.

All those roles demand advocacy, which was central to the ministry of Jesus. The church believes in justice, Hawkins said, but doesn’t often enough practice advocacy. When people of faith realize how Jesus advocated for the poor, they become interested in learning more about advocacy.

That’s the time to turn over tables, in the spirit of Jesus.

The luncheon closed with the presentation of three biennial awards. Pam McVety won the William Gibson Eco-Justice award for her decades-long environmental work in the Florida Everglades. The Restoring Creation Award went to the Interfaith Partners for the Chesapeake.Sarah Ogletree, a recent graduate of Wake Forest School of Divinity, was chosen for the Emerging Earth Care Leader Award.