Home News What do you seek?

What do you seek?

“But strive first for the kingdom of God and his righteousness,
and all these things will be given to you as well.” (Mt. 6:33) 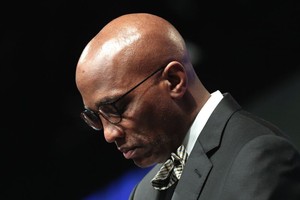 I am thankful to serve as the Stated Clerk of our denomination. Our theme for this General Assembly is taken from Matthew 6:33. It is a reminder that God’s calling upon our life is to commit to that which we do not see. It is a calling to submit ourselves to the power that comes from a realm beyond our control.

“But strive first for the kingdom of God and its righteousness, and all these things will be given to you as well” (Mt. 6:33). It is sure that what we seek is beyond our control, but if we live into this truth, there is a powerful expression of spiritual help and affirmation that will allow us to do abundantly more than we can do for ourselves.

It is amazing that we are in a city today that reminds us of the call of the church to engage the contextual realities of our time. Ferguson/St. Louis in its present reality is marked as a place of tragic struggles by a confluence of race, class, culture, and historic privilege. One must wonder “Why did God bring us here for such a time as this—a time in which we are trying to repair the breach between membership and discipleship?”

We are here in St. Louis at a time in which we are faced with three major groups (including a commission) that are reporting and working on our national church internal struggles, both current and historic.

As the Office of the General Assembly has planned for this meeting, we have engaged our work with the understanding that the Lord does not remove the stumbling blocks so that we can work, but instead creates in us the ability through faith to remove the stumbling blocks while in the midst of struggle. It is then that we can see both the power of God within us while feeling the presence of God within us.

This must be the core of our theological approach to engaging the “Way Forward.” As the OGA continues to work with mid councils who are struggling in a mound of complex problems, we remain committed to assisting leaders with judicial matters, leader training, constitutional interpretation, interfaith and ecumenical witness and collaboration, immigration issues, perspectives on church history, prophetic witness, and other responsibilities assigned by the General Assembly.

We are committed to doing our best in a changing time for both the church and the culture. However, it is our collective faithfulness that will be the grounding for the transformation of this denomination.

I want to contend today that we cannot serve God by building up until we tear down the bridling paradigm of the current state of our faith. The world has changed around us and we have been slow, and in some instances reluctant, to adjust, transition, and engage in transformative change.

Today, transformative change requires us to move from an institutional culture to a culture of movement. We are modeling this call to a movement culture by listening to voices like the Reverend Liz Theoharis, the Reverend Jimmie Hawkins, and a host of others including our Women of Faith honored this morning. These sojourners for the Lord place their hearts, minds, and bodies on the line for the call of the Church to serve as liberators and justice seekers. Governance means nothing if it is not conducted with principles of faith grounded in love. And a church without love is not a church! As people die in the ditches of despair all across our local communities and nation, we must do more to retool the church for today’s needed reform while giving up the idea of remaining or becoming the Church of yesterday. We are called to reform at every level.

This requires three basic moves just to set the paradigm. First, we must shift our faith perspectives from Institutional Cultures to Movement Cultures. Denominations are losing members because we are increasingly believing that it is our institutional strength that is the measure of our success. But Jesus demonstrated that it is our relational efforts that draw people to understand the deeper meaning of our mission and faith commitment.

From Success to Significance

It is important that we strive for Kindom values. This requires us to humble ourselves for the sake of the gospel. It requires us to be grounded in the humility of Jesus. When our faith values are grounded in spiritual humility, we don’t revel or yearn for the glory days of the past. No, we seek the calling of the present age. It is our relevance today that matters. Too often we are still attempting to recapture our past rather than to live into a vibrant future.

I have witnessed leaders who have given up the large steeple churches with all of the maintenance expenses and moved into storefronts because the overhead cost was too much. The structure of previous success was sold and new hope was found in the significance of a new ministry, new location, and new sense of purpose. This may not address your contextual church or mid council setting, but the point is to illustrate that our focus must be on significant witness to the struggles of God’s people. Window dressing will not do in 21st century ministry.

From Change to Transformation

How do we define ministry? The lines of ministry categories are becoming blurred. I spoke to a female Hispanic pastor in North Carolina who views pastoral care as maintaining a file of immigration documents for her congregants. When she waits at the detention center—sometimes for hours—to present the papers to authorities, this is pastoral care for the family and the frightened church members who are feeling that they may be next on the list of detainees.

No longer is pastoral care just at the hospital, but also at the detention center, showing papers for the release of the captives. And, at the church, allaying the fears of those who are afraid.

The Office of the General Assembly is committed to strengthening leaders in an effort to retool the denomination for 21st century engagement. However, this cannot happen without each of us, and those we left back home, adhering to our ordination vow as leaders—to serve with energy, intelligence, imagination, and love.

My travels across the United States and abroad have strengthened my belief that we are still a viable and well-respected denomination. However, we must not overlook the significant work that is being accomplished in local communities throughout the United States by Presbyterian congregations that have not given up on expressing their faith through both word and deed.

Our pursuit of the gospel imperative to strive first for the Kindom of God is exemplified by our advocacy on immigration issues. I am blessed to witness the work of one of our newly elected Co-Moderators, Cindy Kohlmann, who is helping lead the pastoral and advocacy response to an Indonesian immigrant congregation in New Hampshire that has been decimated by deportations.

It is great to witness the changes that are increasing and transforming the witness to God’s justice at all levels of our denomination. The Presbyterian Church (U.S.A.) is not dying. We are reforming. Thanks be to God and our Savior, Jesus Christ.