Still more work to do, says group dedicated to fuller inclusion of all 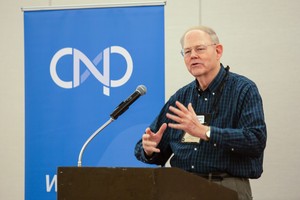 Cliff Kirkpatrick speaks at the Covenant Network luncheon at the 223rd General Assembly of the Presbyterian Church (U.S.A.) in St. Louis on Monday, June 18, 2018. —Photo by Michael Whitman

The group was created in 1998 to work for the full inclusion of all Presbyterians in the life of the Presbyterian Church (U.S.A.), particularly as ordained church officers. Later, the group also worked on behalf of rights of same-gender couples to marry.

The Rev. Clifton Kirkpatrick, a board member who was General Assembly stated clerk when the group started, said, “We should be glad we’re not the main item of business,” referring to the fiery General Assembly debates over LGBTQ ordination and same-gender marriage.

The Rev. Patty Snyder, the outspoken pastor of University Presbyterian Church in Baton Rouge, La., stood and said, “I’m not so quiet,” as several people laughed. Acknowledging that her “persistence … can turn to stubbornness, she said the “covenant conversations” she helps lead in her presbytery are intended to “meet people where they are” and to “walk alongside folks who are feeling the early nudgings of the spirit.”

The next Covenant Conversation about how to continue to move the PC(USA) toward greater inclusivity will be in Boise, and the next, Snyder said, “might be in your presbytery.”

The Rev. J. Herbert Nelson, II, General Assembly stated clerk, told the celebrants that “we have a chance, a significant chance, after all these years of fighting … to take a leap, and make a big stand. …of making a tent that is big enough for all God’s children.”

Nelson thanked Presbyterians for “not letting the church off the hook … continuing to open the eyes of those that need to see.” He said he is “convinced that when we get to see God, we’ll get to say we did our best to try to make the river’s water broader.”