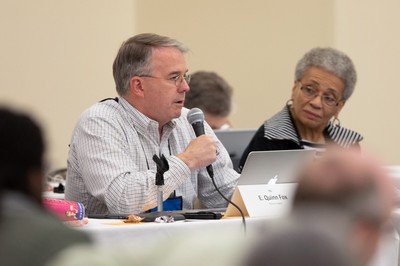 After taking an overnight break, the Assembly Committee on Church Polity and Ordered Ministry continued grappling with how to move the ideals of paid family leave forward in the face of policy and financial constraints.

The committee was also charged with continuing to grapple with issues of restorative justice, which is when a person who previously renounced the jurisdiction of the PC(USA) during a disciplinary proceeding seeks to be readmitted to a leadership position. Describing the pathway for restoration continues to be a linguistic challenge to make sure the process and wording are accurately represented in the Book of Order. Just like several other overtures that would amend the Rules of Discipline, the recommendation of the Advisory Committee on the Constitution was to refer the overtures to the Rules of Discipline Task Force, which is currently revising the Rules of Discipline and will report with suggested changes to the 224th General Assembly (2020).

The committee agreed with most of the recommendations in the overtures and is presenting a blended recommendation on procedures to be followed in such cases until the new rules are in force.

In other business, the committee is bringing to the Assembly their recommendations to: