Michael Blair asks churches to live and serve from the margins 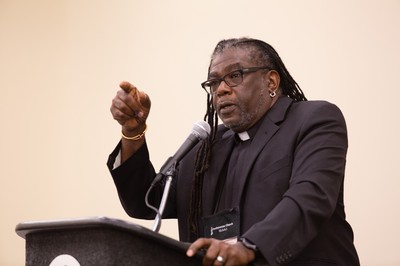 The Rev. Michael Blair of the United Church of Canada at the Ecumenical and Interfaith Relations breakfast at the 223rd General Assembly of the Presbyterian Church (U.S.A.) in St. Louis on Wednesday, June 20, 2018. —Photo by: Michael Whitman

“The curse of Constantine put Christians ‘at the center,’ in our minds at least,” the Rev. Michael Blair explained at the Ecumenical and Interfaith breakfast on June 20. “The Roman emperor established us as a people of power, and we have been trying to maintain our status and privilege ever since. As churches, we need to confront one another about that.”

Blair, executive director of the Church in Mission unit of the United Church of Canada, spoke on “Ecumenical and Interfaith Relations in a Season of Civil and Political Divisions and Hostilities.”

He noted that many sources of exclusion, social stratification and bias stem from attitudes in churches, “and now the chickens have come home to roost” in world and national cultures.

Blair opined that when Christians from the global North praise the concept of “mission from the margins,” it is usually while picturing other people as marginal.

Such a worldview is rooted in the Doctrine of Discovery, imagining explorers traveling out from a “center” to claim and civilize an unfamiliar other somewhere on the world’s periphery. This attitude persists unconsciously even though our churches have formally condemned it.

“We need to reorient ourselves,” he said. In North American churches, we must learn to ask for help from far-flung partners if there is to be true mutuality in mission.

“Are we ready to give up privilege as we serve the God of mission?” Blair asked. “We are called to live and serve from the margin, with energy, passion and grace: for the sake of the world, for healing and for hope.”