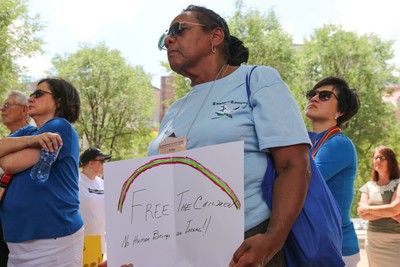 More than 100 Presbyterians stepped away from committee business at the 223rd General Assembly this week to rally on the issue of immigration. Speakers, including the Rev. Dr. J. Herbert Nelson, II, stated clerk of the General Assembly, Co-moderator Cynthia Kohlmann, and others spoke on the need for change in US policy toward immigrants coming into the country.

A series of speakers from churches across the country shared stories of how their congregations have embraced those being targeted by federal authorities for possible deportation. Among them was the Rev. Trey Hager, pastor of First Presbyterian Church of Mt. Pleasant, IA. He described how Immigration and Customs Enforcement (ICE) raids rounded up 70 men from their workplace because they were Hispanic or had dark skin. Twelve of the group have been found guilty, while others remain detained. At least 20 lost their jobs and have been separated from families.

The rally was co-sponsored by Presbyterian Disaster Assistance and the Office of Immigration in the Office of the General Assembly.

“This was a rally for the rights of immigrants that we began planning back in January, knowing we would have a unique opportunity for people across the denomination to gather in one place,” said Susan Krehbiel, PDA’s associate for refugees and asylum. “This gave people a place to share the struggles in their communities impacted by immigration enforcement.”

Nelson encouraged those gathered to carry the spirit from the rally back to their churches and communities and continue to fight for justice.