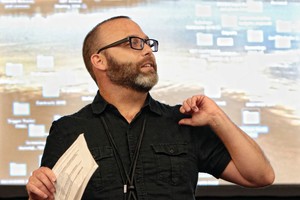 Presbyterians looking for new ways to engage congregations and communities on issues such as gun violence and immigration reform have new resources at their disposal. Presbyterian Disaster Assistance (PDA) has been showing its documentary trailers and those currently in production to attendees at the 223rd General Assembly.

“Story is as basic to human nature as eating and sleeping and is fundamental to our day-to-day lives. Over the years, PDA has recognized the value and sacredness of story and narrative in the process of recovery, but also to connect and cultivate wider circles of community engagement and action,” said David Barnhart, PDA’s associate for story ministry. “We have found that community leaders are hungry for documentary and story resources to bring their communities together to discuss relevant issues.”

Over the years, PDA documentaries have won numerous film festival awards. Some of the films have also been selected for broadcast on ABC and NBC as well as the Martin Luther King Jr. DREAM Film Series.

“I feel story can break through societal and ideological constructs and remind us of our common humanity and commitment to one another,” said Barnhart. “Once people make that deep connection, they are never the same and are driven to be a part of the larger movement toward change.”

During the first of two trailer showcases, Barnhart has given viewers a sense of the tools available to them. Sally Dyer, a PDA volunteer from Dayton OH, shared with the group how the showing of the film “Locked In a Box” became part of an entire citywide awareness event.

“Our conversation started with a church elder and our associate pastor. We then connected with interfaith groups and the peace museum. We just sat down and began talking and it just evolved from there,” she said. “We learned there was an opera on immigration and it morphed into a wonderful collaboration of these different groups.”

“Once you hear the story, you begin to care about the people in these films,” said the Rev. Laurie Kraus, PDA director. “This is a way to awaken congregations without telling them what to do. We are grateful we have the ability and the resources to do this.”