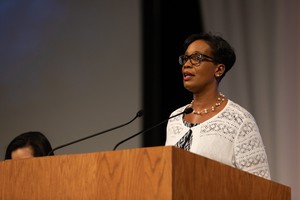 The resolution calls for actions to “encourage peaceful resolution of the divisions on the Korean Peninsula, which will foster an environment where no party to the historic conflict feels the need to sacrifice civil liberties in the name of security and where refugees and asylum-seekers are treated humanely.”

Among other actions, the resolution also calls for exploring, “in conjunction with current refugee ministries, caring and support ministries for those displaced from both South and North Korea.”

The Korea resolution was one of the recommendations brought to commissioners by the Assembly Committee 9: Peacemaking, Immigration and International Issues. The Assembly also approved an overture calling for support and prayer for the church and people of South Sudan.

Luci Duckson-Bramble, the moderator of Committee 9, said of her mission travels, “We learned that the Western world is not aware of this crisis (in South Sudan),” referring to warfare among armed groups that has killed more than 50,000 people and displaced 3.5 million since December 2013.

The overture calls on U.S. leaders to put pressure on all sides to adhere to a cease-fire and to ensure safe passage for humanitarian aid to refugee camps.

The Assembly also approved a series of actions to promote “the welfare of our neighbors in Honduras, Guatemala and El Salvador.” Aimed at developing “a United Witness in the Americas,” the actions include creating the position of a mission co-worker “to facilitate a Meso-American faith-rooted advocacy witness in Central America” along with partners in the region.

The Assembly also called for investing in peacemaking to reduce migration and for increased funding of leadership training in the region.

Referring to cost estimates for these activities, commissioner Kerry Jennings of the Presbytery of East Iowa spoke against the resolution, asking, “How many PMA workers need to be laid off in order to fund a new three-hundred-thousand-dollar experiment?”

Commissioner Noe Juarez of the Presbytery of Donegal spoke in favor of the actions: “I’m aware that this has some financial implications,” she said, “but I think it’s time to invest in our brothers and sisters in Central America.”

Carmen Elena Martinez de Diaz, of the Reformed Calvinist Church of El Salvador, said through her translator: “Partnerships contribute to the strengthening of our churches, but also the churches with which we partner. It’s a process … there’s not a recipe.”

In other actions, the Assembly: