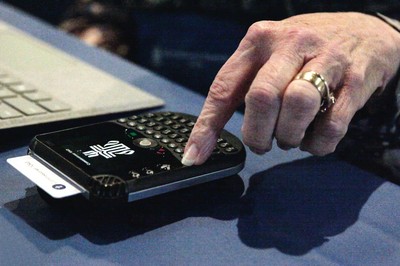 A commissioner at the 223rd General Assembly of the Presbyterian Church (U.S.A.) uses a computerized voting device to register their vote. —Photo by: Danny Bolin

This was one of many items brought to the Assembly by Committee 11. Committee moderator Bill Wildhack noted that his committee had addressed many difficult and challenging subjects.

By a 440–59 vote, the Assembly approved an overture to declare the period from 2020 to 2030 as the “Decade of Intercultural Transformation” by focusing on transformative priorities and initiatives across the Presbyterian Church (U.S.A.) and providing strategic steps to move the PC(USA) into being a transformative church in this intercultural era.

Felix Robles, a TSAD from the Presbiterio Del Noroeste, spoke in his native Spanish language in support of a commissioners’ resolution advocating for the citizens of Puerto Rico. One portion of the resolution called for the establishment a zero-tolerance policy toward colonialism and the double-standard treatment of U.S. citizens who are residents of the Commonwealth of Puerto Rico.

Perhaps one of the most debated items submitted by Committee 11 was an overture calling for the General Assembly to strongly condemn the unjust, racist disparagement of people and entire nations, promoted by politicians and government officials at all levels, in the mistaken effort to place “America First.” The most discussed issue was an amendment to include “the current presidential administration” in the effort to place “America First.” After the amendment was defeated and the language was removed from the resolution, the Assembly approved the item by a vote of 448–54.

Following an emotional presentation from a father who lost his son to an accidental shooting two weeks prior to the start of GA, the committee and the Assembly approved a resolution calling for the PC(USA) to pray for a movement of the Spirit to engage Presbyterian congregations in a nationwide action to prevent gun violence.

The Assembly also approved an overture that calls for an immediate moratorium on the imposition of the death penalty in all jurisdictions that impose capital punishment and for the commutation of all death sentences to sentences of life imprisonment.

A resolution addressing sexual misconduct within the PC(USA) was also approved by the Assembly.

The final item of business from Committee 11 was a commissioners’ resolution asking the Assembly to direct the appointing of a commission to consider the social impact of automation. The resolution was disapproved.