Face-to-Face with the Holy Spirit 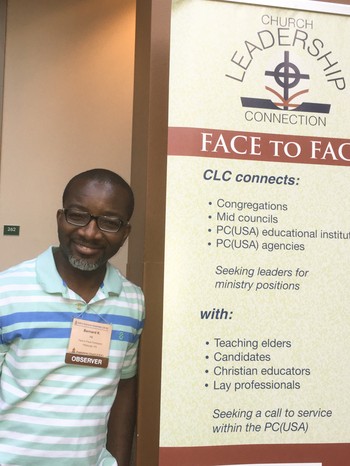 Bernard “Ben” Nti and the Holy Spirit seem to have an understanding. It’s not a private understanding, but one that many Presbyterians sense. But we cannot figure where in the docket to place the Spirit so it can blow down the walls that divide.

“The days of Acts are playing out in our time in a different way,” said the candidate for ministry who attended Face to Face sessions at the 223rd General Assembly (2018) of the Presbyterian Church (U.S.A.).

Nti, 42, stresses that he is no more insightful than anyone else. His passion stems from having difficulty finding a first call and finding inspiration at the intentionally diverse congregation since becoming a student at Pittsburgh Theological Seminary five years ago.

Some all-white and all-black congregations have interviewed Ben in the last year, said Nti, an American who is a native of the Republic of Ghana in west Africa. Some seem uncomfortable calling him because of the change that would be felt.

The challenge is not just because he speaks with an accent, but more so his reliance and guidance from the Holy Spirit to make congregations uncomfortable for a time.  He believes the Spirit is calling comfortable Presbyterian from all backgrounds to get uncomfortable and physically welcome people different from themselves.

“God chose that very day for a reason,” he said, referring to the amazing diversity of those gathered at Pentecost, who heard the Gospel in their own languages. “The Spirit came in a way for the world to see how God is very diverse,” he said.

The church can be strong only if we are all together, a point made by the lesson of the broom he learned in Ghana. A few pieces of straw will bend or break, but when all the straw is gathered together it is unbreakable. He prays that the PC(USA) will open to the diversity urged by the Spirit and become strong.

A similar call was issued at the May meeting of the Presbytery of Grace by the Rev. Blair Monie of Grace, who said Pentecostalism is growing the fastest in Christendom, while Presbyterians and many others continue losing members.

Presbyterians need not change their Reformed Theology to invite the Holy Spirit to engage us, he said adding that the time to do so in now.

Nti said the way to avoid being afraid of people different from ourselves is to “allow the Holy Spirit to break barriers and break walls…but people are more afraid of different, and it is still very comfortable where they are.”

“Let’s go to the place that the Holy Spirit wants us to be,” Nti suggested. “Yes, it may be uncomfortable at first ― but stay there for the blessing that God brings through that.”

Asking questions of people as opposed to applying “programs” to them is the way to engage people who are different than the majority culture in a particular congregation, he said. It is better to ask who they are and what they need than to decide for them.

“Listen to those who disagree with us,” Nti said. “Don’t call them to be enemies … or silence their voices. For the church to be the church we need all the voices. Welcoming of the other must start from a willingness to be hospitable. And the Spirit will help us with that.”

Nti, a candidate from the Presbytery of National Capital, is seeking a call while working at Eastminster Presbyterian in Pittsburgh, where he lives with his wife and their seven-year-old son.