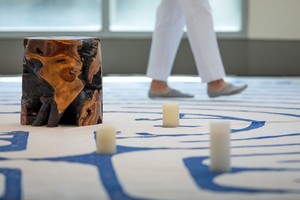 An attendee at the 223rd General Assembly of the Presbyterian Church (U.S.A.) in St. Louis walks the labyrinth on Wednesday, June 20, 2018. —Photo by Michael Whitman

Even a church in motion needs a place for rest, which is why members of the Committee on Local Arrangements (COLA) of the Presbytery of Giddings-Lovejoy were determined that prayer at the assembly would be both embedded into the week as well as embodied in those participating.

The result has been places for resting weary spirits, and perhaps even wearier soles.

As COLA members began their planning, they hoped to provide options for experiential spirituality in addition to the liturgies created for daily worship. A devotional booklet was created that included original coloring pages by artist Adam Walker Cleaveland of Illustrated Children’s Ministries and contributions from across the presbytery. Volunteers filled the prayer room in room 127 with soft lighting and comfortable furniture as well as materials for drawing, listening and meditating.

A portable labyrinth was unfolded in room 200, which also provides an overview of the streets of downtown St. Louis.

These mini-retreats have proven popular with GA attendees. Inside the prayer room, local Presbyterian pastor the Rev. Susan Hayes has been offering morning yoga classes — combining gentle morning stretches with prayer. In another corner, a massage chair and table have been set up for Reiki sessions offered by Reiki master and Presbyterian lay pastor Julie Gvillo.

Gvillo was uncertain how Reiki — a form of Asian spiritual healing — might be received at the assembly, but her appointment book filled quickly.

Gvillo, a member of LoveJoy United Presbyterian Church in Wood River, Ill., says she views Reiki as a form of “embodied prayer” and “sacred touch” that seeks to restore spiritual energy through touch and prayer. Gvillo says the result is often described as “receiving a hug from God.”

“When I began exploring Reiki,” Gvillo said, “I noticed that many of the prayers used were nearly identical word for word from the Presbyterian service of healing and wholeness.”

At the center of the prayer room is a large wooden door painted to represent the themes expressed in the hymn “Draw the Welcome Circle Wider,” which was written by Mary Louise Bringle and commissioned for the assembly. St. Louis artist Marilyn Ruth Smith, a member of Second Presbyterian Church, painted the door panels. After the assembly, the door will be displayed at Ladue Chapel Presbyterian Church.