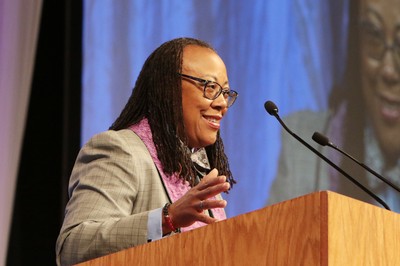 As a child, when Barbee-Watkins asked her mother to make her some biscuits ― the homemade kind ―her mom would say that she didn’t have the time, then add that she would in fact always serve the canned kind.

Years later, Barbee-Watkins found out why. It seems that mom had tried to make biscuits from scratch one time ― and her dad had commented that they looked like Humphrey Bogart’s jaws.

Barbee-Watkins wondered why those biscuits had turned out so big. The answer wasn’t so simple. Too much flour? Not enough yeast? Oven too hot? Dough too cold? Not enough flour? Too much yeast?

Barbee-Watkins shared this story at the outset of her sermon, titled, “The Radical Difference.” She spoke to the commissioners at the 223rd General Assembly (2018) of the Presbyterian Church (U.S.A.) Thursday morning.

“I want you to consider our own journey as siblings in Christ, as we wrestle with our faith, our failures and how we desire to live so that God can use us, but often miss the mark,” she said.

Drawing on the biblical parables of the Mustard Seed and the Yeast, Barbee-Watkins opened with her text, Luke 13: 18-21: “He (Jesus) said, therefore, ‘What is the kingdom of God like? And to what should I compare it?  It is like a mustard seed that someone took and sowed in the garden; it grew and became a tree, and the birds of the air made nests in its branches.’ And, again he said, “To what should I compare the kingdom of God? It is like yeast that a woman took and mixed in with three measures of flour until all of it was leavened.”

“So, we enter this text with an understanding that Jesus is on his way to Jerusalem,” she said. “We also understand the context of this chapter as the writer shares without reserve the Jewish-ness of Jesus. His ancestery.com wasn’t necessary.”

Barbee-Watkins said the writer of Luke’s gospel takes pains to help us to see that the struggle is real and demonstrates that God led the church the way it went, despite some turbulence.”

“This Kin-dom of God is an eschatological reality, but it is not a here-and-now actuality,” she continued. “We live into hope, with an assurance of God’s providential presence in our passivity and our passion. We have become tired Christians, and ministry has become a matter of routine. Not only are we tired, we are burned, spurned and repulsed by the actions of the empire and church leaders.”

“We don’t want to make fresh biscuits, let me just open up a can and call it a new, or enough,” Barbee-Watkins added. “We’ll put a fancy wrapper on it, rather than the sacred and loving way of kneading the dough with the right amount of each ingredient to create sustainable, vital, radical new ways of being the church bathed, in the butter and willingness to follow the radical path of Jesus Christ.”

Barbee-Watkins said the PC(USA) has made some bad biscuits through the participation in the cruelty of Native Siblings as revealed in the ‘doctrine of discovery.’

“Thanks be to God, we repudiated that last night,” she said.  “And when the denomination voted on an amendment to the PC(USA) constitution that disqualified individuals identifying as LGBTQI … we made some bad biscuits.”

“Beloved, the PC(USA) has made some amazing biscuits as evidenced through the policies on racism, gender bias, poverty, gun control, to just name a few,” Barbee-Watkins said. “We know how to make good succulent, kin-dom biscuits.”

“And so I think that there are three radical differences that we as PC(USA) siblings are called to do! It’s time to make some biscuits, but first we must make the biscuits of radical confession, radical repentance, and radical reconciliation the order of the day!”