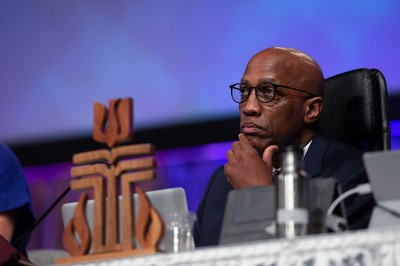 More than 750 faith leaders and faith organizations have written a letter to President Trump and members of the U.S. Congress expressing their “deep concern” over historically low refugee admissions into the United States.

Signatories to the letter included the Presbyterian Church (U.S.A.) and its General Assembly Stated Clerk, the Reverend J. Herbert Nelson, II, and 88 Presbyterian leaders from around the country. For a complete list of those who have signed the letter, check out the Church World Service article.

“We Presbyterians are a Matthew 25 church—which means we are committed to feeding the hungry and giving drink to the thirsty, to clothing the naked and visiting those in prison,” said Nelson. “Perhaps most importantly that means welcoming the stranger and caring for those who come to us seeking refuge. We cannot do otherwise and still call ourselves followers of Jesus Christ. We also cannot accept the policies and actions of our government that deny hospitality to those who need and deserve it. This is a biblical mandate.”

As of August 3, just over 18,000 refugees have been admitted to the U.S. this year. The administration’s target for refugee admissions this year is a historically low 45,000. Recent reports indicate the administration may reduce the goal even further—to 25,000 or fewer—next year.

The full text of the letter, dated August 21:

As more than 636 religious leaders and 121 faith-based organizations across traditions, we write to express our deep concern about the low number of refugees who have been resettled to the United States thus far in Fiscal Year 2018 (FY18), as well as rumors of an even lower goal being set for FY19. While the administration set the U.S. refugee admissions goal at a historically low 45,000 for FY18, as of August 3rd, just over 18,286 refugees have been admitted. This means that the United States is on track to provide life-saving resettlement to less than half of the people the administration promised to welcome this fiscal year. Recent reports that the administration is considering setting the refugee admissions goal at 25,000 or lower for FY19 are also deeply concerning. These reductions would leave thousands of vulnerable refugees in limbo, and signify an abdication of our nation’s leadership in humanitarian protection.

We are called by our sacred texts and faith principles to love our neighbor, accompany the vulnerable, and welcome the sojourner. Our congregations, synagogues, and mosques have historically played key roles in assisting refugees with housing, language, employment, and social supports necessary for rapid and effective resettlement into U.S. communities. Yet, our commitment to offer refuge from violence and persecution requires our government to demonstrate the moral leadership upon which our nation was founded. To arbitrarily restrict tens of thousands of people from seeking safety would be to forsake our nation’s values of compassion, hospitality, and welcome.

Since its inception in 1980, the U.S. Refugee Admissions Program (USRAP) has been an international model, providing refugees protection with bipartisan support through our public-private partnership. The USRAP has successfully provided more than three million refugees tools for integration and self-sufficiency to start over in safety and our communities have in turn benefitted from these individuals. As a pillar of U.S. foreign policy, our nation’s resettlement program represents a standard of excellence that other countries look to as a touchstone for their own policies.

Refugee resettlement is the last resort for those who cannot return to their home country due to ongoing violence or for reasons of personal safety, and who cannot stay in the country into which they have fled. The United Nations High Commissioner for Refugees (UNHCR) estimates that 1.4 million individuals meet these standards and are in need of resettlement this year. Not only is it our moral duty as a nation to do our fair share to welcome the world’s most vulnerable, but we know that resettling refugees is a part of advancing our strategic foreign and national security interests. In fact, refugees are the most scrutinized travelers to the United States and face the most rigorous screening that someone entering this country must undergo, spending roughly two years in exhaustive vetting processes by our nation’s top security and counter-terror experts.

At no other time has our moral responsibility to uphold these principles been greater. War, conflict, and persecution have forced millions to leave their homes, creating more refugees than at any other time in history. According to UNHCR’s recently released Global Trends Report, more than 68.5 million people are currently displaced, including more than 25.4 million refugees, over half of whom are children. In a world where conflict or persecution forcibly displace nearly 30 people every 60 seconds, our nation’s responsibility to protect vulnerable refugees is more important than ever.

People of faith are especially concerned by the implications of low refugee arrivals for particular populations of concern such as families seeking to reunite, religious minorities, and children. Family unity is a cornerstone of U.S. refugee resettlement, given the importance of family values in our country and the crucial role that a united family plays in refugee protection and integration, and it is unacceptable to see families being separated due to U.S. policies. Similarly, we express our deep concern for the impact of low arrivals on religious minorities, including Christians, Muslims, and others who find themselves persecuted because of their religious affiliation and are thus left without options to safely practice their faith. Finally, Unaccompanied Refugee Minors (URM) are truly the most vulnerable refugees and as the United States is the only country to operate a resettlement program for these children, low arrival numbers have a unique impact on their options for safety.

Faith communities in particular remain ready and eager to welcome refugees and decry the policies that are preventing refugees from receiving protection at this time. Many of our faith communities have made public statements of our commitments to offer hospitality to refugees. For decades, people of faith have welcomed refugees into our homes, houses of worship, and communities. Refugees are powerful ambassadors of our founding principles of equal opportunity, religious freedom, and liberty and justice for all. Our experiences working alongside refugees mirror the statistics that demonstrate that refugees bring tangible benefits to U.S. communities by starting businesses, becoming homeowners, revitalizing local economies, and becoming civic leaders.

Given the many ongoing and emerging displacement crises around the world, people of faith will not stand by idly as the United States turns its back on these individuals. Refugee resettlement is a critical tool our nation can use to relieve human suffering, and we urge the administration to fully utilize it. As we look ahead to the final quarter of this fiscal year, we urge the administration to meet its own goal of resettling 45,000 refugees this year, and to commit to resettling at least 75,000 refugees in Fiscal Year 2019. Our collective scriptural mandate and our nation’s history and capabilities as a world leader demand no less.

We pray that in your process of discernment, compassion for the plight of refugees will touch your hearts. We urge you to be bold in choosing moral, just policies that provide refuge for vulnerable individuals seeking protection.