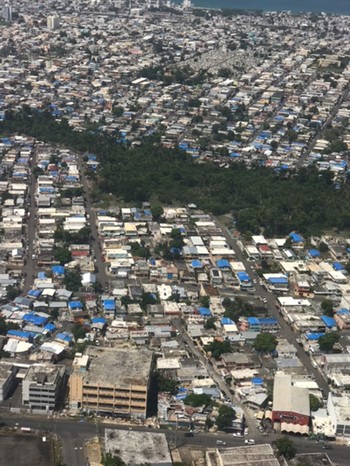 Thousands of homes across Puerto Rico still have blue tarps on the roofs a year after Hurricane Maria. —Edwin Gonzalez-Castillo.

On September 20, 2017, life changed for millions of people living in Puerto Rico. That’s when Hurricane Maria, packing winds in excess of 174 miles an hour, slammed into the island. The Category 4 storm left millions homeless, destroyed the island’s power grid, and killed thousands. A year later, the island is still in the midst of recovery.

This week, a delegation from the Presbyterian Church (U.S.A.) is visiting the island. The group includes Co-Moderators Rev. Cindy Kohlmann and Elder Vilmarie Cintrón-Olivieri; the Reverend Dr. Laurie Kraus, the Reverend Jim Kirk, and the Reverend Edwin González-Castillo, all with Presbyterian Disaster Assistance (PDA).

For Cintrón-Olivieri, it is a homecoming.

“This is my first visit to Puerto Rico since I became Co-Moderator. This is the island that saw me grow and nurtured me, and this is the church I love and have served for many years,” she said. “Standing here as a representative of the church is not only humbling, it carries a lot of responsibility. In the time of struggle, I’m finding that embrace, love, and connection are refreshing, knowing that our church has gone through so much. To be here on my first official visit to three of our presbyteries is a reminder that we are a church and we are connected.”

It was Kohlmann’s first visit to Puerto Rico.

“I’m always very aware of both the sacrifices people make to be present and, in this case, the willingness to share a painful day with people who didn’t experience it,” she said. “I’m especially moved by gracious hospitality and the invitation to share really difficult memories. But they’ve also shared in the hope of what is still to come. It’s not just restoration, but something new is growing out of this disaster, a ministry to connect.”

On Thursday, the group visited several communities damaged by the hurricane and the churches that received a grant from PDA. Among the stops was the Hatillo Presbyterian Church “El Paraiso.” What was supposed to be a five-month temporary assignment is now moving into its fifth year for Lay Pastor Luis Soto. 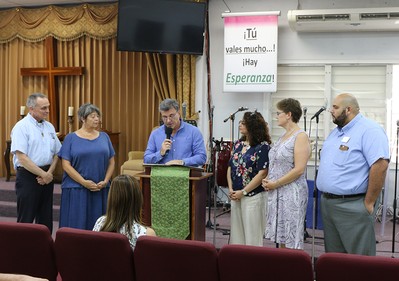 “We didn’t have it as bad as other areas, but we didn’t have power in the church until November of last year,” said Soto. “All of the roads were closed and I could not reach the church. Fortunately, the building itself was not severely damaged, but we lost a lot of trees. We had to use machetes to remove them.”

Soto recalls spending twelve hours in line waiting to fill up a few gas cans, as well as working with emergency response to coordinate deliveries of groceries and clothing to those in need.

However, a year later, Soto says the storm has cost them some members. “Some people don’t come, or if they do, it is very infrequent. Many are sad and depressed, and we are working to integrate them back into the church.”

The group traveled to the community of Isabela and met with church leaders and members at Montclair Presbyterian Church. The Co-Moderators and PDA leaders heard how the churches have responded to the aftermath.

“Maria has taught us a lot and we have become stronger. It has brought out the best of us and it shows that churches do serve the communities,” said Dagmary Fornés, moderator of Northwest Presbytery. “Thanks to funding from PDA, we were able to take presbytery leaders and pastors on a resilience retreat. We have also been working closely with the Federal Emergency Management Agency (FEMA).”

The church delegation was also recognized by Isabela Mayor Carlos O. Delgado Altieri, who presented the group with a proclamation.

“One of the things we appreciate is the help from organizations during and after Maria. A lot of people have been impacted emotionally and are carrying a lot of trauma,” he said. “The people need spiritual and emotional healing and the church has been an important part of rebuilding. We are thankful for the Presbyterian Church [(U.S.A.)] who has helped us in an amazing, structured, and organized way.”

Other stops on the first full day included the Presbyterian Church in Ańasco, where members and volunteers have not only made strides in church repair but have opened a food and supply pantry as well as a PDA volunteer village known as “Angels’ Lodge.” 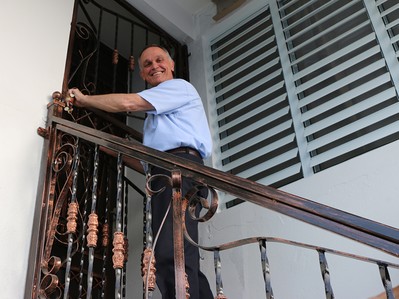 “I always thought I would work for the Lord one day. I never thought the Lord would bring me this far,” said Ada Lis Luciano, church administrator and disaster relief coordinator for the Southwest Presbytery. “The first day I was able to connect to the Internet after Maria, I contacted PDA. Never in my life would I believe the Lord would allow me to work with PDA.

Throughout the meetings, including a final session at Rio Cristal Presbyterian Church near Mayagüez, pastors and lay leaders told the delegation of their struggles and how they have been able to mobilize and support communities in ways they never have before.

“Many of us did not open our eyes to the problems on the island until Maria,” said one pastor. “Our neighbors were in trouble and many of us didn’t see it until the hurricane.”

The delegation will visit other churches and communities through Sunday.

To support recovery efforts in Puerto Rico, click here. You’ll be taken to the PC(USA) website to donate securely and quickly.