Pastor Richard Rojas describes walking into his sanctuary at Puerto Nuevo Presbyterian Church after Hurricane Maria and sitting down and crying. The Category 4 storm hit his church in Puerto Rico hard. Roofs were torn off adjacent buildings, a metal fence lie twisted on the street in front of the church, and there was water damage in the sanctuary.

Rojas, like most pastors across the island, were left to pick up the pieces. With no power, little food, water, and other essentials, he and others learned quickly that working together was better than working alone. Over the next few months, pastors and church leaders within San Juan Presbytery began a program called “Rise and Shine,” an opportunity for residents impacted by Maria to gather for a time of rest, recreation, and support.

San Juan Presbytery hosted one of its monthly “Rise and Shine” events at the Bayamón Presbyterian Church. Photo by Rick Jones.

Over the weekend, the group spent the morning at one of the monthly Rise and Shine events, a health fair, at Bayamón Presbyterian Church. The fair included health kit giveaways, mammogram screenings, and a blood drive. Other activities included a children’s reading session and puppet show, as well as an adult seminar on suicide prevention.

“We have monthly meetings at different churches in the our presbyteries and we have also reached out to churches in the other two presbyteries. We also rely on our congregations to share the news,” said the Reverend Adolfo Santana-Cordero, designer and chair of the Rise and Shine Commission. “More than 1,300 community members have been impacted, more than 2,000 meals have been shared, and approximately $8,000 in grocery vouchers have touched 300 families.”

Eight of the fifteen communities within the presbytery have been impacted by the monthly community gatherings. Events are scheduled through the end of the year. The Reverend Luis Ocasio, moderator, says each month carries a different theme.

“The pastors of fifteen churches came as did Presbyterian women and elders when we first met. Every pastor gave a personal brief of their church,” he said. “We all cried, but from there, we sensed there was something that needed to be done. It’s been beautiful to see the outcome.”

González-Castillo says the community gatherings have allowed small churches and those with severe damage to participate. 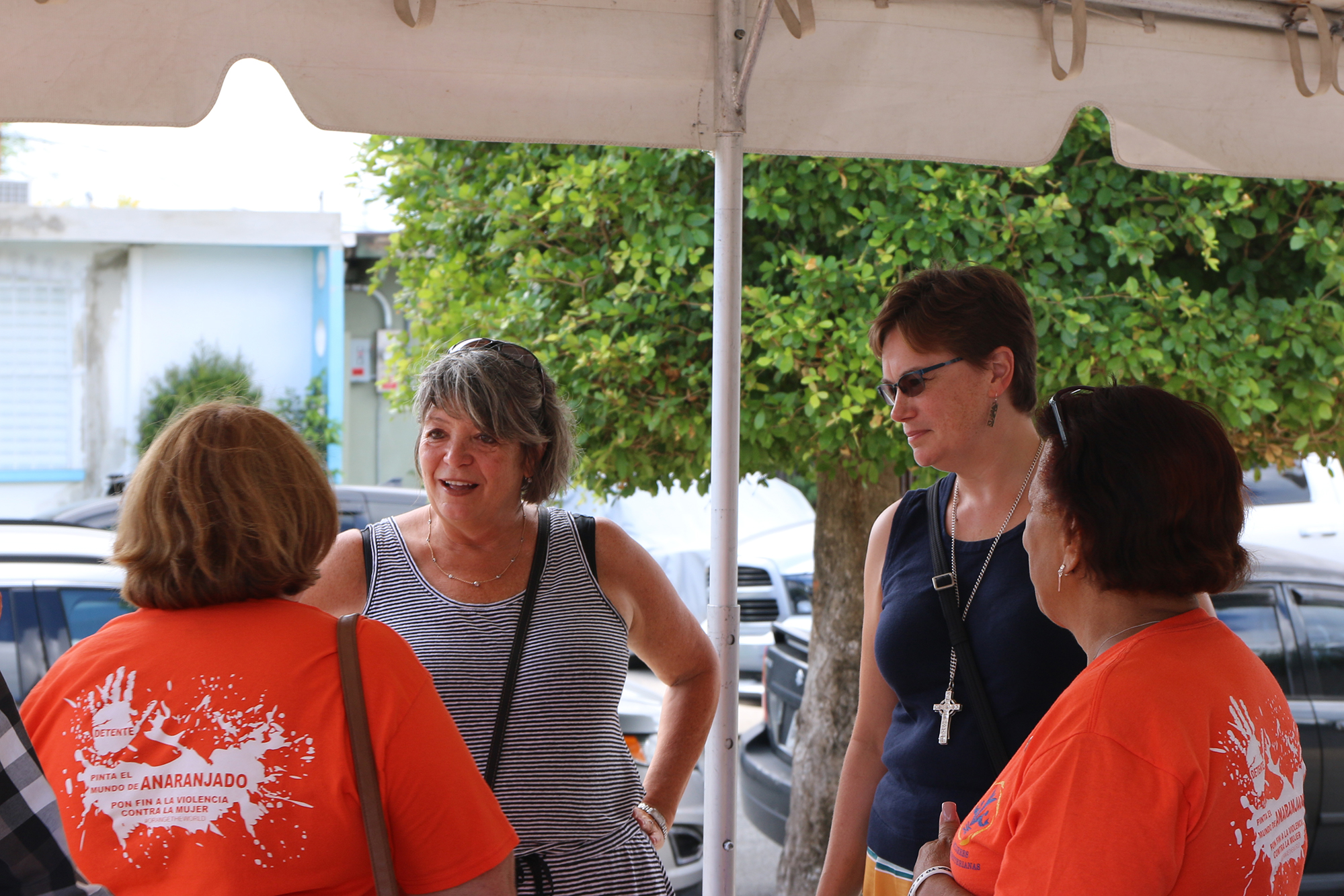 “Many of these churches couldn’t do it themselves. There were many things happening in the background as events were being planned,” he said. “This helped the churches that didn’t have the resources to get involved.”

On Saturday, members of the delegation visited the health fair in Bayamón and donated blood at the blood drive. Doctors say there is still a critical shortage in donations for the island.

“It’s amazing what these pastors have been able to do. They planned a straightforward simple series of events that were not expensive, but had a huge impact,” said Kraus, who was one of the donors. “This is a model we want to share with other presbyteries.”

Ocasio says “Rise and Shine” has also been a blessing to the pastors and lay leaders who have been involved.

“When something wonderful happens, you feel better. We weren’t doing it for personal gain, but gratefulness from the purest concept comes from people who lost everything,” he said. “These events provided a personal touch. We could see it in the people’s eyes and that makes us humble and grateful for being in that moment at that time.”

Raúl Santiago-Rivera, vice moderator of San Juan Presbytery and chair of the Recovery Commission, says people are often shocked when he says Hurricane Maria was one of the biggest blessings of 2017. 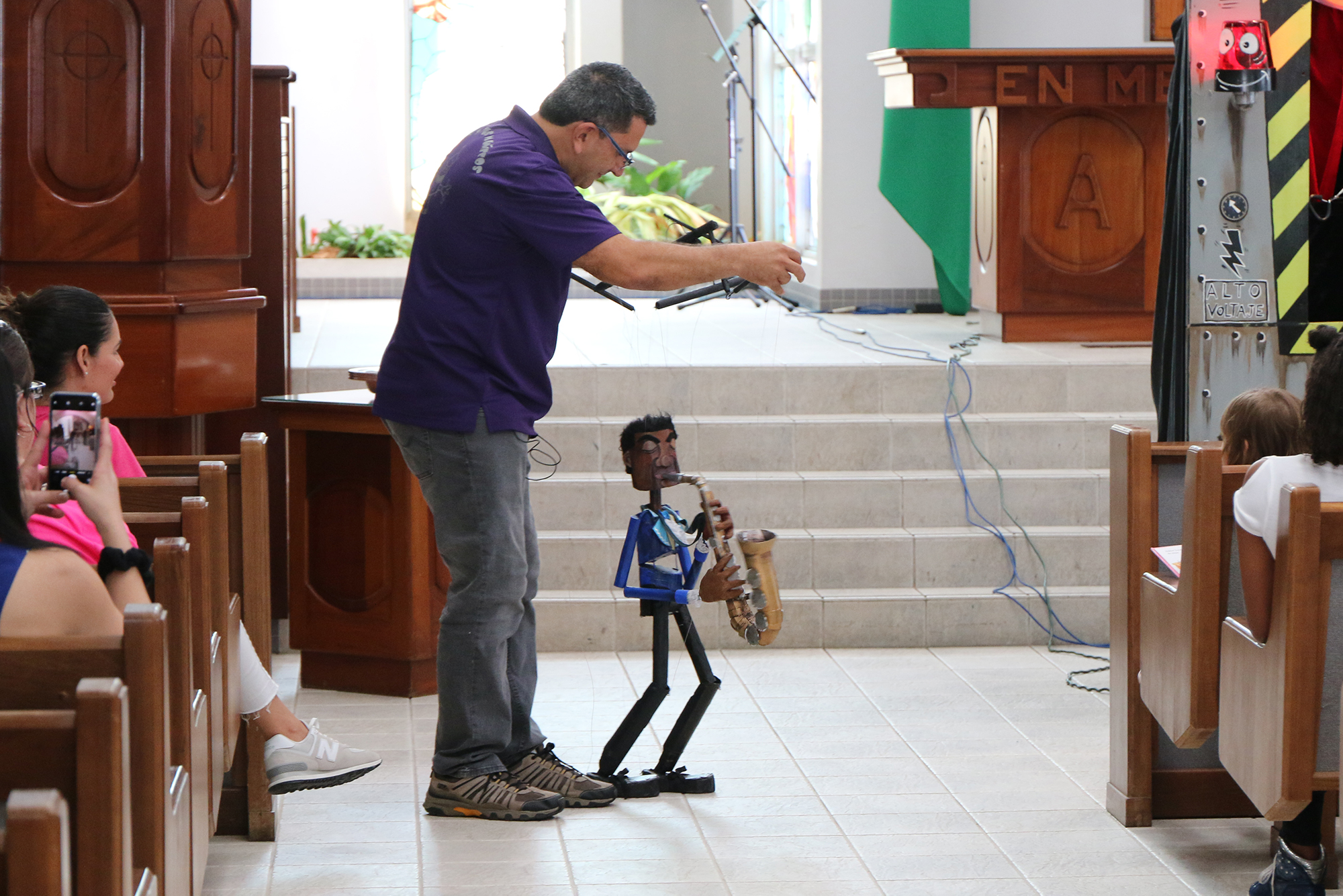 Rise and Shine activities included entertainment for children such as reading groups and a puppet show. Photo by Rick Jones.

The Co-Moderators addressed the presbytery, saying they were overwhelmed and amazed at what the churches have done to come back from Maria.

“I cannot imagine how you, under the circumstances you were going through, came up with the Rise and Shine initiative,” said Cintrón-Olivieri. “This was a brilliant way for churches to come together. You did an amazing job and I’m nothing but proud to say this is the presbytery that saw me grow and nurtured me.”

Kohlmann echoed those thoughts, deferring to the difficult winter in the northeast that left her presbyteries with several feet of snow, roads impassable, and damage to churches.

“We had 110 inches of snow over the course of four weeks and the weather never broke and never warmed up enough for snow to melt. By the third week, our churches couldn’t meet and parking lots were half filled with piles of snow. People couldn’t get to work, public transportation was shut down, streets were not safe. We were in a slow-moving disaster,” she said. “I worked with churches in their communities, but it never occurred to me that the presbytery as an organization and body of Christ, could impact our communities in such a way.”

Presbytery leaders hope to reach all fifteen communities through Rise and Shine by the end of the year. At that time, the pastors plan to reevaluate and determine next steps in the island’s road to recovery.

To support recovery efforts in Puerto Rico, click here. You’ll be taken to the PC(USA) website to donate securely and quickly.