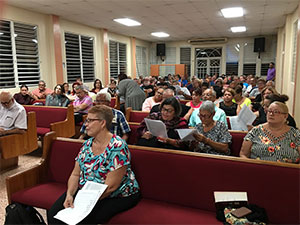 Presbyterian leaders in Puerto Rico crowd a church during one of the sessions led by the OGA delegation. —Photo by Tricia Dykers-Koenig

A delegation from the Presbyterian Church (U.S.A.)’s Office of the General Assembly recently returned from a visit to Puerto Rico and came away surprised and encouraged by what they saw. The six-member group met with presbytery leaders and pastors over several days last month to share information and to look at ways the national church can help local churches move forward.

One year after Hurricane Maria left nearly 3,000 people dead and thousands of homes, businesses and churches damaged or destroyed, the delegation found church leaders eager to grow and to build a connection with the larger church.

“I think it was a good opportunity for us to build relationships and hear what the concerns, joys and celebrations of the Puerto Rican presbyteries were,” said Jihyun Oh, manager for call process support. “Obviously there’s so much talk about disaster recovery from Hurricane Maria, but what was so amazing is that the first presbytery we spoke to is doing some creative things and thinking about ways it can expand its ministry.”

“We had two days with each presbytery — one day with folks from sessions and their pastors, and another day with leaders of various presbyteries and presbytery committees,” said Griffith. “We talked with sessions about their constitutional responsibilities, from broad to specific items — nurturing the covenant community of disciples of Christ through required maintenance of roles and statistics and creating child protection and sexual misconduct policies.”

Griffith and the others weren’t sure what to expect when they arrived. Churches have been working endlessly since the hurricane to meet the ongoing needs of congregations still dealing with power outages, lost wages and lack of adequate food and medicine.

“What I was amazed about was the commitment everyone had to their mission and their witness for Jesus Christ,” said Griffith. “Their enthusiasm was wonderful to see.”

The delegation says the presbyteries felt they were behind their counterparts in the States in terms of organization, but soon found out the opposite was true. 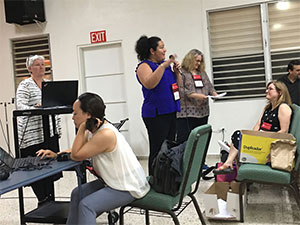 “For years, Presbyterians in Puerto Rico have felt the issues they faced were unique, but they learned during our visit that they are not,” said Vélez-Díaz. “Their challenges are much like those that other presbyteries are facing. It was heartening to see connections happening and conversations take place.”

Puerto Rico was home for Vélez-Díaz until six months ago, when she joined the OGA staff.

“I am still a member of San Juan Presbytery and I was glad to have the opportunity to strengthen some of the bridges and see relationships be formed,” she said. “The connection with national staff and mid council folks was very successful. People were excited and grateful to see that staff was present and share information and resources with them. On the other hand, all of us were amazed by all of the things that the presbyteries are doing.”

“They were very receptive to our program and our presence there. I’ve never seen turnout like that. It almost got competitive,” said Casteel. “We had 140 people on the first night, 28 of 31 churches represented. They were really enthusiastic, and barely had enough space to contain the crowd.”

Casteel says church leaders in Puerto Rico are hungry for a connection to resources. “They were open to thinking about their work in new ways, which is huge. They were OK when we said we were not there to fix problems but to help them find solutions.

Vélez-Díaz says that kind of response is unheard of when visiting other presbyteries.

“Some have a hard time getting people to show up or meetings, but that was not the case in Puerto Rico,” she said. “It was fun to see presbyteries brag about their attendance, and then the next presbytery felt they had to up the game.”

The delegation said disconnect has been a significant problem in Presbyterian life, with congregations trying to go it alone, not wanting to share their struggles with one another.

“I think that in some ways, the leaders are proud of the accomplishments they’ve made. They are more engaged in their communities because they have been reaching out to help,” said Dykers-Koenig. “People in communities are in need, and the churches are able to assist. There is some exhaustion from all of the post-hurricane work, but people came out each night for three hours and had a lot of energy.”

“It was a good learning experience, considering our new commitment, post-General Assembly, to translate English into other languages, but also other languages into English for resources,” said Oh. “I was really hopeful, and it was another way of seeing the denomination’s strength in people who are doing ministry.”

“We stressed that we are one church, building relationships. It was a great opportunity for us to get to know them,” said Dykers-Koenig. “We think this is a good model for other presbyteries to find out what some specific needs are for training. This was very energizing for us.”