Stated Clerk looks to challenges, opportunities facing the church in 2019 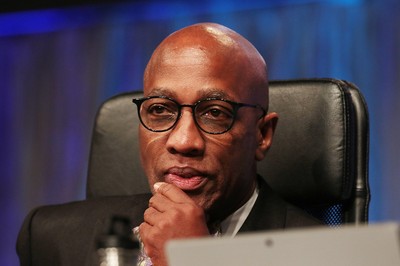 For two and a half years, the Rev. Dr. J. Herbert Nelson, II, has listened to the heartbeat of the church. The Stated Clerk of the Presbyterian Church (U.S.A.) has been on the road for most of his tenure, meeting with presbytery and synod leaders and listening and worshiping with churches facing difficult times.

Nelson says one of the challenges is the continued need to lift the spirits of those who have been through trauma over the past 30 years in the life of the denomination.

“Congregations that are representative of splits from larger congregations that existed and the struggles that we’ve had in becoming an all-inclusive church are among those challenges,” he said. “There have also been struggles in addressing or not addressing some of the contextual realities that we are dealing with in the world.”

Nelson says the political atmosphere in recent years has impacted everyone.

“I don’t think all of us are wholly conservative, liberal or moderate. I believe we are free thinkers who have an ability to do great things when we allow our minds to be expanded,” he said. “And yet these categories, even in the life in the church, have caused us to categorize ourselves. Interestingly, Jesus doesn’t mention any of that in the Bible and does not carry those labels.”

As membership declines in some churches, congregations are searching for direction, says Nelson.

“We see families in the denomination who are split and in different churches. The way in which we resolve these internal struggles is going to be a continued emphasis in the life of this denomination,” he said. “The quicker we learn how to resolve that and be the community that we are, rather than lamenting over what we used to be, will have a great deal to do with how we are projecting our future.”

Nelson also says the church needs to be recharged.

“I don’t believe we are a poor church. I believe we still are a church of wealth. A few studies make it clear we have an enormous amount of money within the denomination,” said Nelson. “I do believe the self-image of the PC(USA) is now challenged in how we see ourselves. We have a lot, but we see ourselves in a much smaller picture because of what we’ve been through and the decline we’ve faced over the years.”

Nelson says he finds churches asking what to do now.

“We are not the church we used to be and not necessarily in the same community we used to be,” he said. “We are an aging church and younger people are not in church as they once were, and we don’t know how to get them here. What we need to do as older people is to try and help them be part of the church.”

According to Nelson, the great evangelism challenge is learning to talk about Jesus and speak to the authority of the scriptures and faith.

“As Presbyterians, we can no longer sit back and not have a faith that speaks of Jesus and speaks to the power of Jesus in our own lives. We can’t sit back and refuse to tell our stories of what our faith has done for us because somehow, we’ve framed that as private,” he said. “Our faith is not private, it is very public. And Jesus had a public ministry not a private ministry. If we’re modeling the behavior of the one we follow, we too have to be about the business of publicly expressing who we are in Jesus Christ.”

Nelson says the PC(USA) has attempted to model that at the national level around faith, justice and contextual issues.

“We are putting scripture, rationale with regards to faith in Jesus Christ, and the Old Testament prophets to give declaration to fact that this is biblically grounded, and it is a part of who we are as a people called Presbyterians, not just something we read and adopt in our own language,” he said. “This is our Lord and Savior and we are going to have to learn how to talk about Jesus again.”