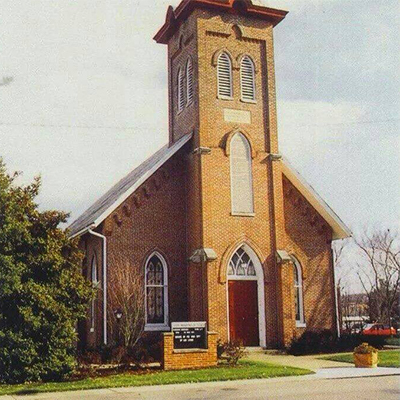 The church bell at Dresden Madison Presbyterian Church has been through a lot over the past two centuries. It is one of the few remaining items from the original church. The Dresden, Ohio, congregation is holding a major celebration this Sunday, the church’s 200th anniversary.

“I think we’re all pretty excited about it. It’s not every day that something reaches 200 years of age,” said Randy Cox, a member of the session at Dresden. “This church had several firsts when it was organized; the first choir, first Sunday school, and first women’s society.”

Dresden also had the first church bell in the community.

“The women formed a society specifically for the purpose of buying the church bell in 1849,” said Cox. “It was installed in the church and rung for the first time in July 1850. Then, just a few days later, President Zachary Taylor died, so the church bell was tolled a half a day in his memory.”

The church was originally established in 1819 when James Monroe was serving as the nation’s fifth president. The rural congregation, made up mostly of farmers, met on the banks of the Muskingum River.

“The congregation originally met in a one-room school house in the 1830s and eventually raised enough money to build the first church,” said Cox. “It was remodeled several times and eventually ended up looking like one of the churches in New England with a front portico, pillars, and a 75-foot steeple. Today’s church was built on the same foundation as the old church.”

Cox says the furnace room in the present church, built in 1880, is from the original building and is often referred to as the dungeon.

“We had the first pipe organ in Dresden. When they remodeled the church in 1880, they took the pipe organ out and put it in storage in a warehouse. Unfortunately, the warehouse went up in flames along with the organ,” he said. “They got by with pianos and pump organs until the early 1900s and finally got another pipe organ, but it quit working.”

Cox says the exact whereabouts of the organ now is a mystery; however, he says he’s been told that since they did not have the funds to repair it, the congregation donated the organ to the College of Wooster.

The church will celebrate the milestone anniversary with a regular morning worship on Sunday, followed by a catered lunch and an afternoon service. A local resident, who portrays historical characters, will portray the wife of a circuit-riding preacher of the 1800s.

Cox says there is a lot to be said for a church that has sustained itself all these years.

“I would say we are founded on the rock, a firm foundation, literally and figuratively,” he said. “It would be nice to say the church will celebrate its 400th anniversary, but I don’t think I’ll stick around for it.”